To celebrate her journey into motherhood, a new mama entered a Mother’s Day photo contest being held by Governor’s Square Mall.

Hoping to share the wonders of being a mother and show off her two children, she submitted a professional photo taken by a local photographer depicting the mother breastfeeding her two children in the middle of the forest. Hoping to win a mall gift card, she didn’t think twice about her tasteful photo, seeing as it portrays one of the most honest and beautiful aspects of motherhood.

Hours after submitting her photo into the contest, she received a discouraging reply from mall staff informing her that her photo had been disqualified from the contest. 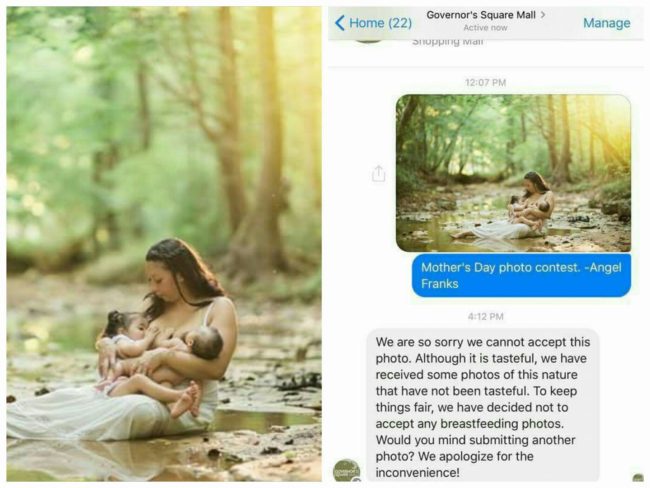 The staff member went on to say, “We are so sorry we cannot accept this photo. Although it is tasteful, we have received some photos of this nature that have not been tasteful. To keep things fair, we have decided not to accept any breastfeeding photos.”

Confused by the mall’s reaction, she reached out to popular pro-breastfeeding Facebook page “Breastfeeding Mama Talk” to help spread the unfair treatment she received over the innocent contest entry.

You can read a transcript of Breastfeeding Mama Talk’s post below:

A breastfeeding mama tried to enter her beautiful breastfeeding photo taken by Iron Lace Photography in the Governor’s Square Mall’s Mother’s Day photo contest and her photo was denied due to the fact she is breastfeeding in it.

This is unacceptable. How can you run a Mother’s day contest and deny a photo of a mom doing one of the most motherly acts a mom could do? This is not acceptable and I really hope they do the right thing! The mom has reached out to me for help so let’s all ban together and let them know that breastfeeding mom’s are not gonna tolerate being shunned.

You can help by sharing this and leaving supportive comments. Let’s refrain from leaving any reviews at this time. I want to give them a chance to correct their wrong. I will be staying in touch with the mama and will update you all as needed. Thanks!

“I submitted this photo to my local malls annual Mother’s Day photo contest and this was the response I received. I feel so defeated. I have been fighting this fight for far too long. Encouragement is needed.”

Do you think her photo is too risqué for a harmless Mother’s Day photo contest? Let us know what you think in the comments and be sure to share with other moms so they can weigh in.