Whether you’ve found the love of your life or you’re still on the hunt for prince charming, chances are you’ve kissed a few frogs along the way.

Navigating the world of dating is anything but a perfect science and you’re bound to have a bad date or two. Between the nervous sweating and forced small talk, no date is perfect, but only a few can truly be considered the worst dates ever. As you sit there swiping left or right on Tinder, it’s important to remember that you’re not alone, and that no matter how awful your dating life may seem in this moment, you’ve got to be doing better than these 50 Twitter users.

3. This is some next level awkwardness!

5. Who doesn’t love a guy who’s obsessed with good hygiene?

6. You were selected by the Chosen One.

7. Something tells me the waiter did this on purpose.

8. In hindsight, at least he didn’t send his wife to voicemail.

9. Apparently driving for Uber makes you a business professional.

10. This is why you always ask for pictures before meeting up for a blind date.

12. So much for whispering sweet nothings in your ear.

13. On their second date they accidentally ran into all his exes.

14. He’s already replacing his ex before she’s even had a chance to move out.

15. This woman wasn’t willing to horse around with her date.

18. If you have to take a Twitter poll to gage how the date’s going, chance are you won’t be getting a second one.

19. Nothing like a jab at your appearance! Head to the next page if you want to keep cringing.

20. Diarrhea to the rescue.

21. I mean…why does a grown-ass person have a bean bag chair, first of all?

23. These damn chip readers do more harm than good.

24. He was just trying to save a few bucks off the drink bill.

25. She just wanted to know if she could have a bite.

26. I’ve seen soap scum with more class than this asshole.

28. Maybe he should have sorted out his issues with his ex before trying to get back into the dating game.

29. A true gentleman waits for the perfect opportunity to tell you you have something in your teeth.

31. Hey lady, if you can’t love yourself, how in the hell you gonna love somebody else? Just kidding. He’s the worst.

32. This dude doesn’t waste any time.

33. This guy went from superhero to super zero.

34. That should be illegal, honestly.

35. This is me when I arrive super early to anything. Go to the next page for true dating class. 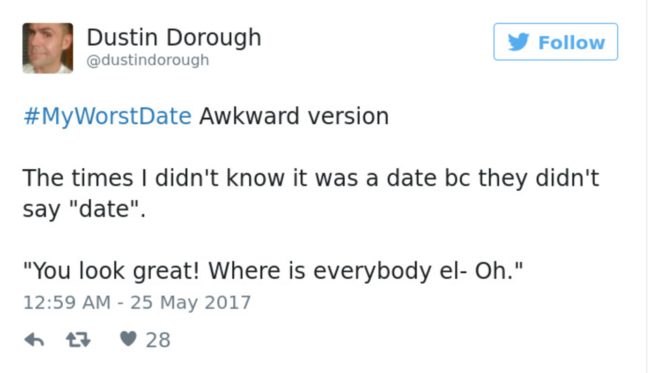 39. This sounds like an awesome way to get friendzoned.

40. “Have I mentioned you look like somebody that I used to know?”

41. You’re going to have to do more than that to make me spend the night.

42. But at least she got those air miles.

45. Who doesn’t love a man that can barter? Clearly this woman. 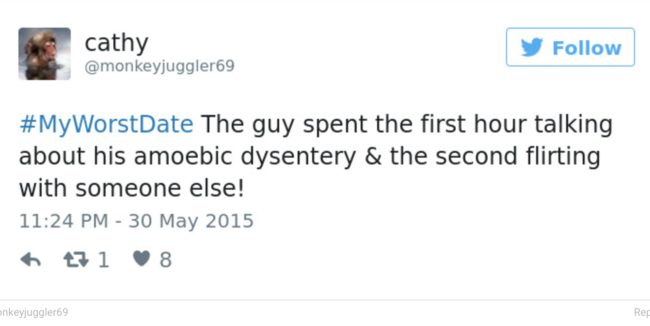 47. This takes some dedication to put together an entire presentation.

48. She took him home, but things didn’t go quite like he anticipated.

49. This just sounds too dirty.

50. He thought he was sly until the waitress came to ruin the night.

Have you ever been on a truly horrible date? Let us know your dating horror stories in the comments and be sure to share these hilarious stories with your friends!