While many of us can agree that reasonable dress codes are necessary in professional and educational settings, some schools take it way too far when it comes to young girls.

It seems that all too often, girls are told to cover up their bodies because it will make their male classmates uncomfortable or distracted — even when the only body parts actually showing are bare arms or shoulders.Nobody’s saying that they should be allowed to come to school naked, but strict dress codes can send a message that girls should be ashamed of their bodies and that they are responsible for any unwanted attention that comes their way. When it comes down to it, the sexualization of young girls leaves lasting damage.

One seventh-grade student from Kansas, 13-year-old Grace Villegas, was recently criticized for wearing an off-the-shoulder shirt to school.Her teachers made her so uncomfortable about it that she decided to change into a different shirt.

Grace had just bought this shirt and was excited to wear it to school, but her teachers shamed her with negative comments about how it was inappropriate.”I went into school and I received some looks from teachers, just not nice looks,” she told BuzzFeed. 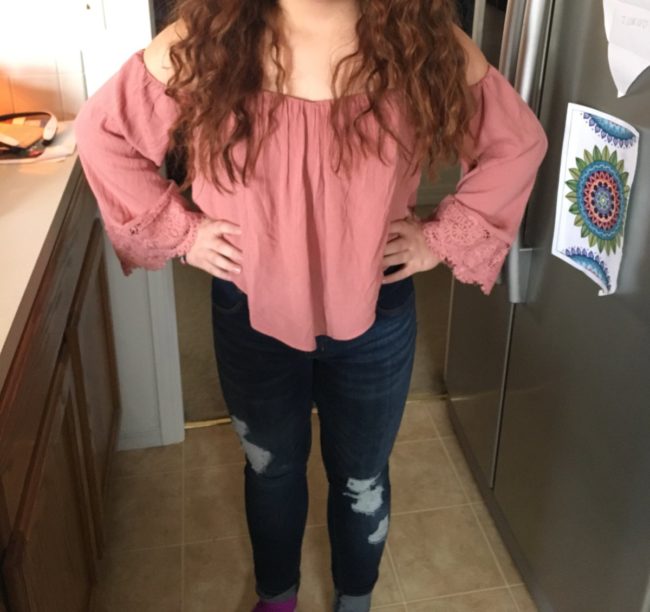 Read More: What She Said Might Shock Most Moms, But Does She Have A Point?

When her 18-year-old sister, Isabella, heard about what happened, she was understandably angry.”First of all, she did nothing wrong. And secondly, even if it was wrong, they should have handled it like adults, not teenagers. As a middle-schooler she has enough to deal with regarding gossip and ridicule and should not have to fear getting it from her teachers as well,” Isabella said.

hey so here's a pic of my face cuz that's what we do right pic.twitter.com/bsK8idLZYw

That’s when she decided to make Grace this shirt to send a powerful message about unfair dress codes.It reads, “Dress code: promotes the objectification and sexualization of young bodies, blames the wearer for the onlooker’s perceptions/actions, perpetuates rape culture, is BS.”

my 13 year old sister was dress coded for her shirt today for "revealing too much chest and shoulder" so i made her a shirt to change into pic.twitter.com/NdRQws91HB

It’s ridiculous that Grace was criticized for just showing her shoulders, but luckily she has an awesome big sister to teach her how to stick up for herself.Share if you think there’s nothing wrong with what she was wearing and that looking at young girls like sexual objects says more about onlookers than it does about them.