Over 27,000 endangered Asian elephants live in India, with many in close proximity to residents of West Bengal. Unfortunately, the two do not co-exist peacefully.

National Geographic reports that while elephants use 101 corridors to travel through India, only 20 percent of these belts of land don’t have any human settlements. Much of the pachyderms’ natural habitat has been taken away by humans. This crossing of paths has led to elephants damaging homes and destroying crops and farms. A number of people are even killed by elephants, with 18 dying in West Bengal between January and September 2015. Tensions are very high between people and elephants in the Indian state, and one incredibly heartbreaking photograph highlights this conflict in a powerful way.

Wildlife photographer Biplab Hazra won the Sanctuary Wildlife Photography Award 2017 with his photo titled, “Hell Is Here.” It captures a mother elephant and her calf fleeing a mob wielding balls of burning tar. The baby can be seen engulfed in flames, but surprisingly, it survived the attack. 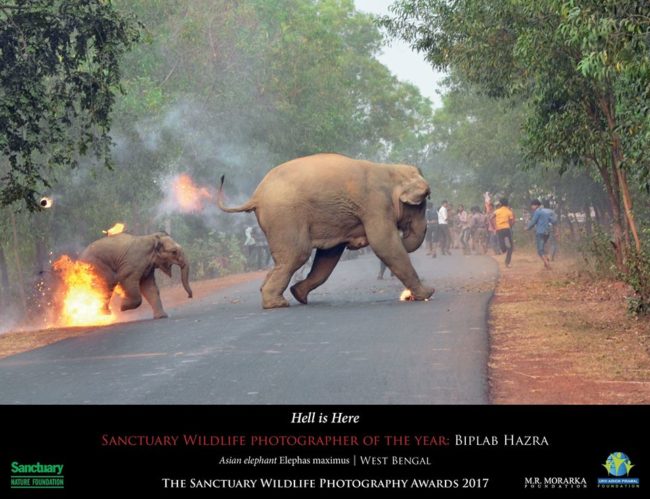 “The calf may not have been intentionally set on fire by the villagers living in the vicinity of the elephant corridor that stretches from southwestern West Bengal up to Saranda forest in Jharkhand,” Hazra said. “But bursting crackers and throwing fireballs on elephant herds has been a common practice in this part of West Bengal.” Learn more about the conflict between elephants and humans below.

“Crowd management is one of the key practices that needs to be strictly followed in human-wildlife conflict management,” said Dr. Ananda Kumar, a scientist at the Nature Conservation Foundation. “We need to get across to people that these large animals need space. We have to create awareness that violent behaviour would only lead to tragic incidents.” You can learn more about the elephant text messaging system here.