His Wife Finally Gave In And Let Him Build This. The Basement Will Never Be The Same Again.

“My wife won’t let me do it” is a notorious line, sometimes based on truth, other times just an excuse. In the case of user skerley1979, it was unfortunately true. Then, finally, his wife gave in and turned him loose in the basement to build exactly what he wanted.

The result? Pretty epic. Check this out, in his words from imgur:

Day 1 of framing complete. I was trying to wrap this up as quickly as possible because my wife did not enjoy me having the basement tore up as much as I did. 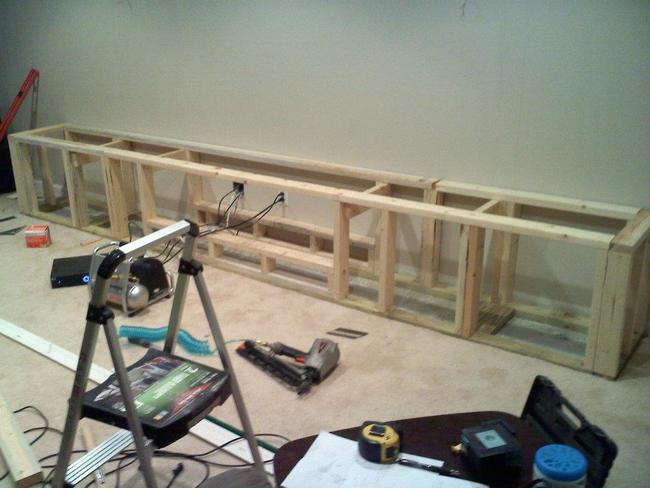 I had to put the television back in place in time to catch the Walking Dead.For size references, the TV here is a 55″. 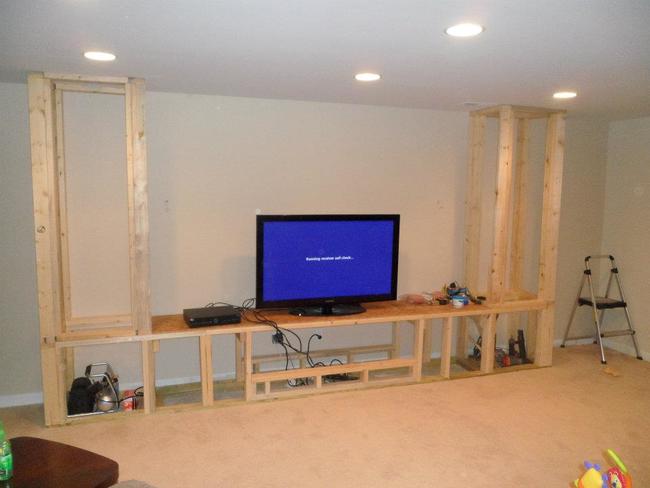 Day 2 of framing.I didn’t get as far as I wanted to because my daughter wanted to help.I think I was distracted a few times and had to correct a few things. 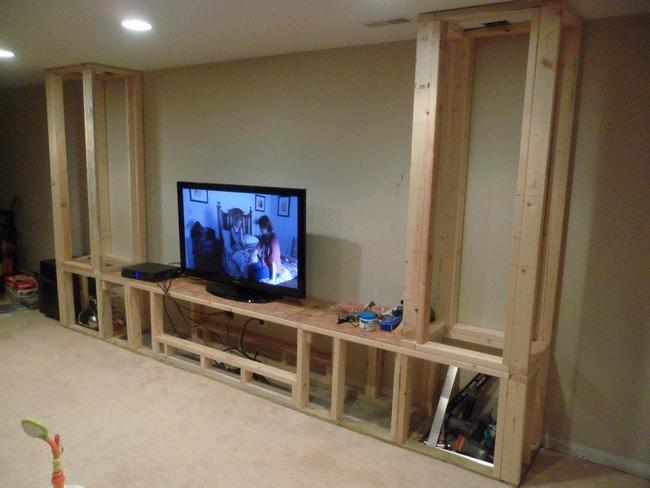 Success… drywall/tape and first coat of mud on.. 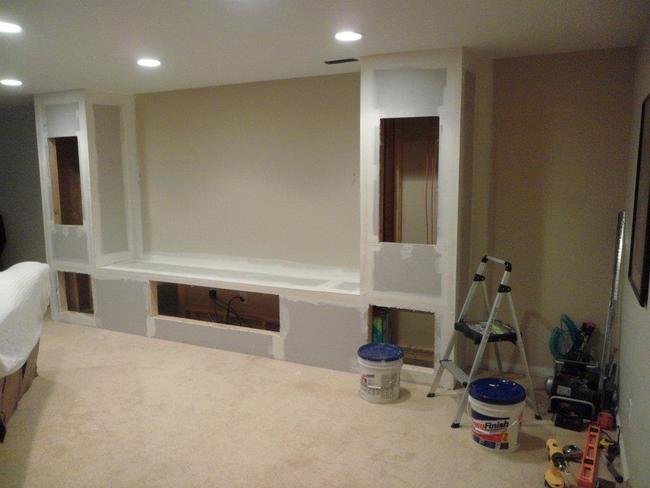 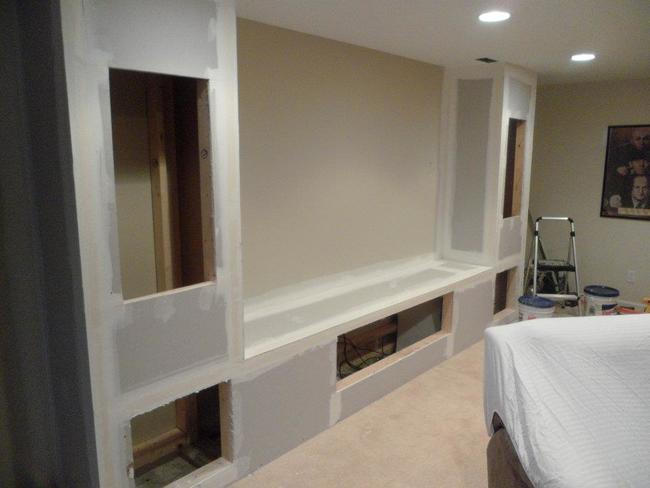 Everything is sanded, and I placed 2 coats of black paint on where the screen is going to be installed at. 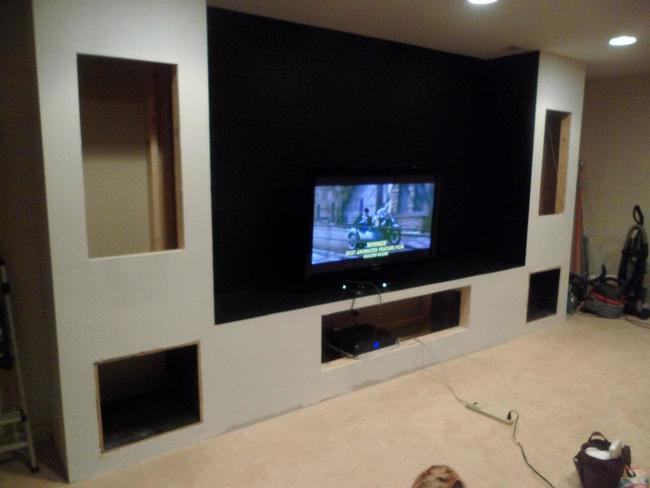 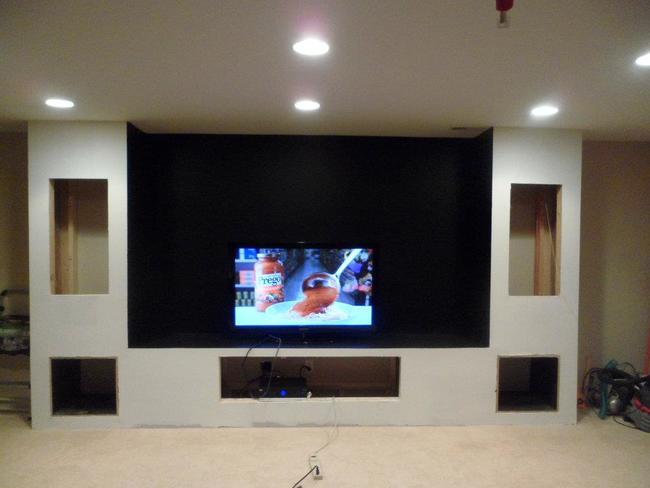 We were going to place DVD’s in the towers on both sides, but I am starting to decide against this idea… It reminds me too much my parent’s displaying all of their VHS tapes in the 90’s.I now will have to decide what to put here. 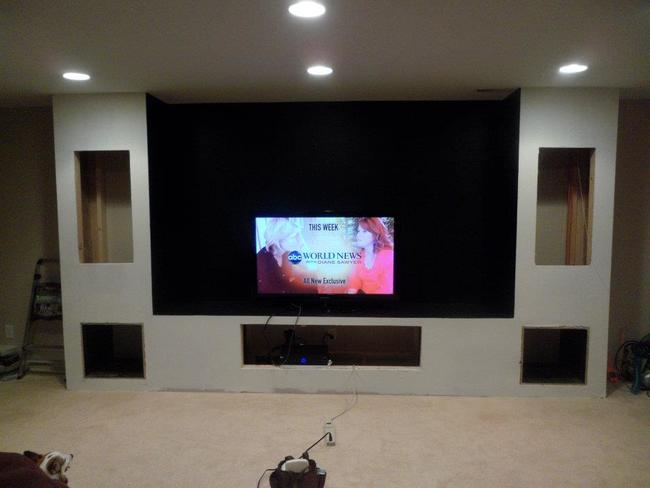 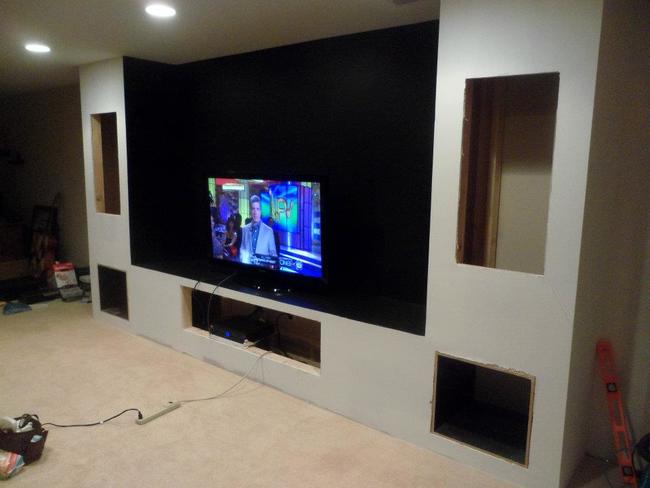 Screen put together and hung up on the wall!We agreed not to place the DVD’s in the towers..Guess this means I can go out and purchase some bookshelf speakers. 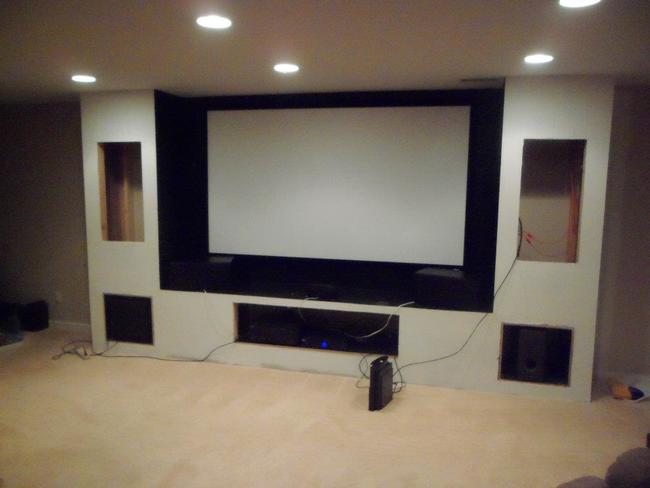 Everything trimmed out, and all the speakers are in place.

The projector is hung.I had to cut a few holes in the ceiling and soffit to run the wires earlier during the install.That was the worst part about this.A little patchwork fixed it right up though. 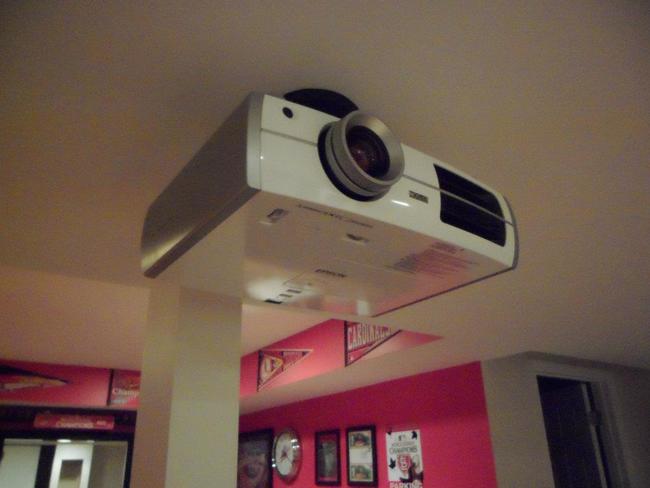 Yes, this is the unfinished bar in the back ground).I need to still install the arm-rail and put the flooring in., 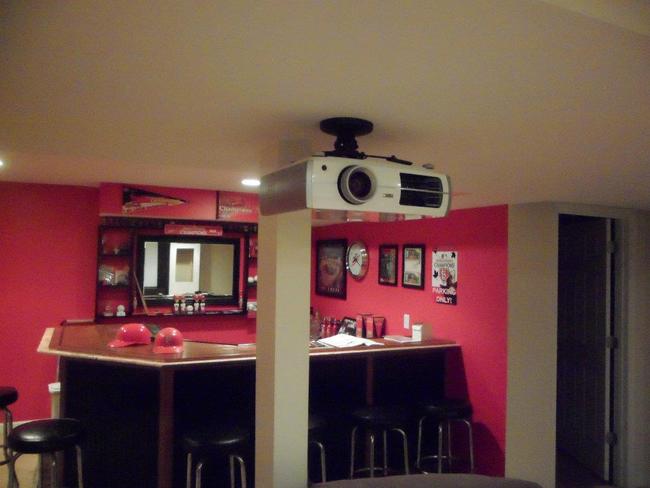 **Updated photo of the new mount on the post.With the previous mount, the projector shook whenever anyone walked around upstairs.** 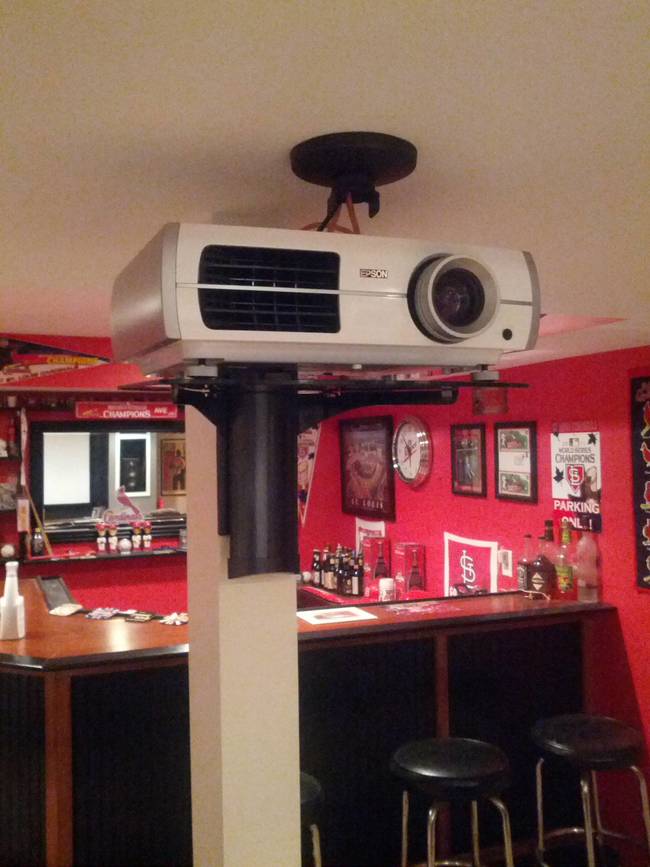 I don’t care for (2) different sub-woofers, so this will be fixed shortly. 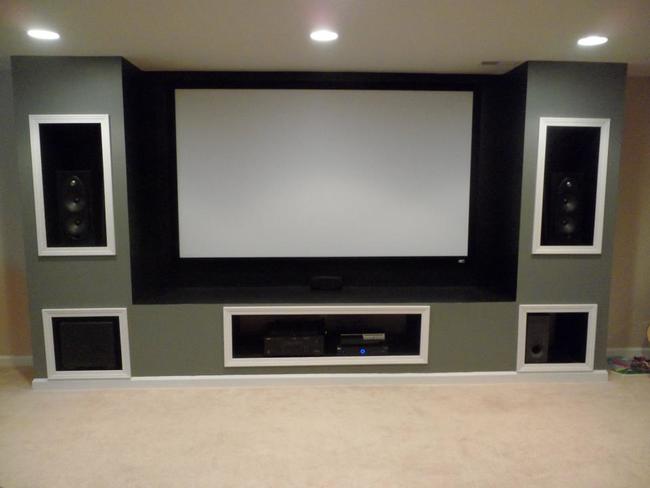 View from behind the bar 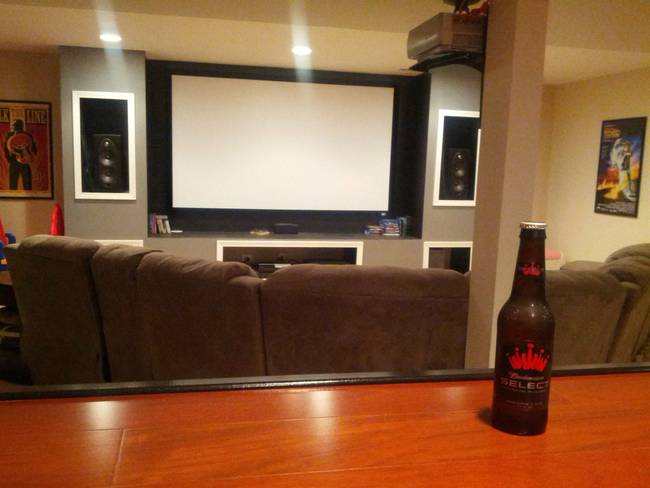 To the left is our office desks and my daughter’s play area. 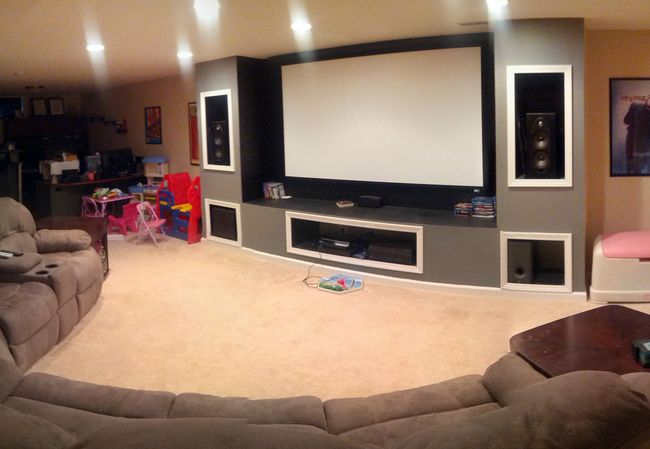 Looking back towards the bar. 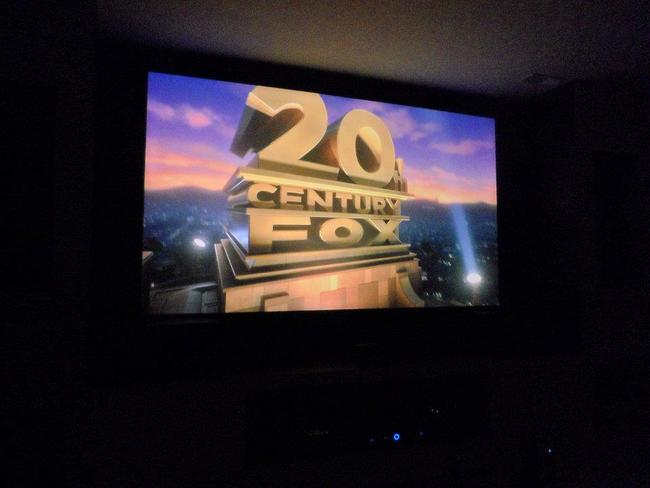 I don’t know what his wife thinks of it, but I’m guessing she loves it. The moral of the story here? Women, let your men build anything they want where ever they want without any questions asked.