If Your Kids Watch This Show, A Study Suggests You Should Check Their Search History

Whether you’re a Netflix fanatic or the parent of a teenager, chances are you’ve heard of the drama “13 Reasons Why.”

It’s the controversial show that had millions of people across the country starting a debate about the topic of suicide. While some praised the show for its gritty portrayal of the issue, others thought the content was too much for its intended adolescent audience. Some mental health experts even warned that the depiction of depression and suicidal thoughts could have a significant impact on young people already suffering from mental illness.

And while teens, parents, and those curious about the impact of the show took to social media to voice their opinions, a new study reveals that the premiere of the controversial show’s contributed to a much darker search habit for teens across the country.

According to a research paper published in JAMA Internal Medicine, following the premiere of “13 Reasons Why” back in March, online search terms related to suicide ideation saw a surge in hits by teens.

The study revealed that during the span of 19 days following the show’s release, the search phrase “how to commit suicide” rose 26 percent above normal expectations, while other phrases such as “suicide prevention” and “suicide hotline number” increased 23 percent and 21 percent, respectively.

At that moment everything was perfect.

If these searches correlate with action, the results could be devastating for young people.

To refine their findings, researchers narrowed the target list down to 20 suicide-based phrases.

Of those 20 search terms, 17 of them saw a surge in search results during the days between the show’s release and the prominent suicide of NFL player Aaron Hernandez. 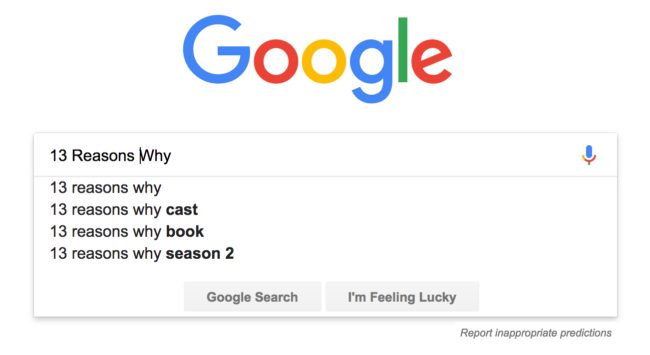 The percentage increase accounted for anywhere from 900,000 to 1.5 million more inquiries than was to be expected.

Studies like this are inherently tricky, though, since conflating causation with correlation is a slippery slope. Still, the findings are suggestive of a problem regardless of the show’s direct role.

‪1.02: tape 1 side B Hannah: What? Feeling paranoid? On the edge? ‪Give credit when using my screencaps by tagging me on the photo💗‬ ‪Have a scene request?? Comment it below! – main acc: @hnahbaker

Have you watched “13 Reasons Why”? Let us know your thoughts about the controversial Netflix series in the comments section.