For nearly aquarter-century, Vanity Fair has put into print a special Hollywood issue highlighting the achievements of some of the biggest and brightest names in La La Land.

But with the recent Hollywood sexual abuse scandals rocking Tinseltown to its core this year’s celebrities turned cover models were able to grace the fold-out cover not just for their incredible talents on screen, but also for their contributions and support of the #MeToo and Time’s Up campaigns. Gracing the cover this year are big names such as Reese Witherspoon, Tom Hanks, Zendaya, and even our favorite bread-loving queen Oprah.

What’s better than having your face on the cover of millions of copies of one of the world’s most popular magazines? Getting to shoot the cover photos with world-renowned photographer, Annie Leibovitz, of course. But when the time came to unveil this year’s cover, the Internet was taken by surprise by some serious photoshopping faux pas.

At first glance, nothing seems out of the ordinary on the cover. Just a bunch of famous men and women posing looking the gods and goddesses that they are.

But if you focus in on Reese Witherspoon and her dress, you might notice that she appears to have a third leg.

im tryna figure out how many legs reese witherspoon’s got in here, it’s been bothering me for the last five minutes pic.twitter.com/u1uQ63sDdd

One Twitter user even joked that it appeared as though Reese stole a leg from Zendaya, leaving her with one a leg to stand on.

She took a leg from zendaya. Where does her leg go? pic.twitter.com/49THsQVTko

After noticing the photoshop snafu, Reese took to Twitter to make light of her “shocking biological revelation.”

Well…I guess everybody knows now…I have 3 legs. I hope you can still accept me for who I am. 😃( and I will never apologize for snuggling @Oprah .. if you get the opportunity, I highly recommend it;) https://t.co/6GyrfWxNSY

But Reese’s extra leg wasn’t the only big reveal on the Vanity Fair cover. As it turns out Oprah has a third arm.

Even a behind the scenes photo from the cover shoot proves that the former queen of daytime television has been hiding a third arm for all these years. 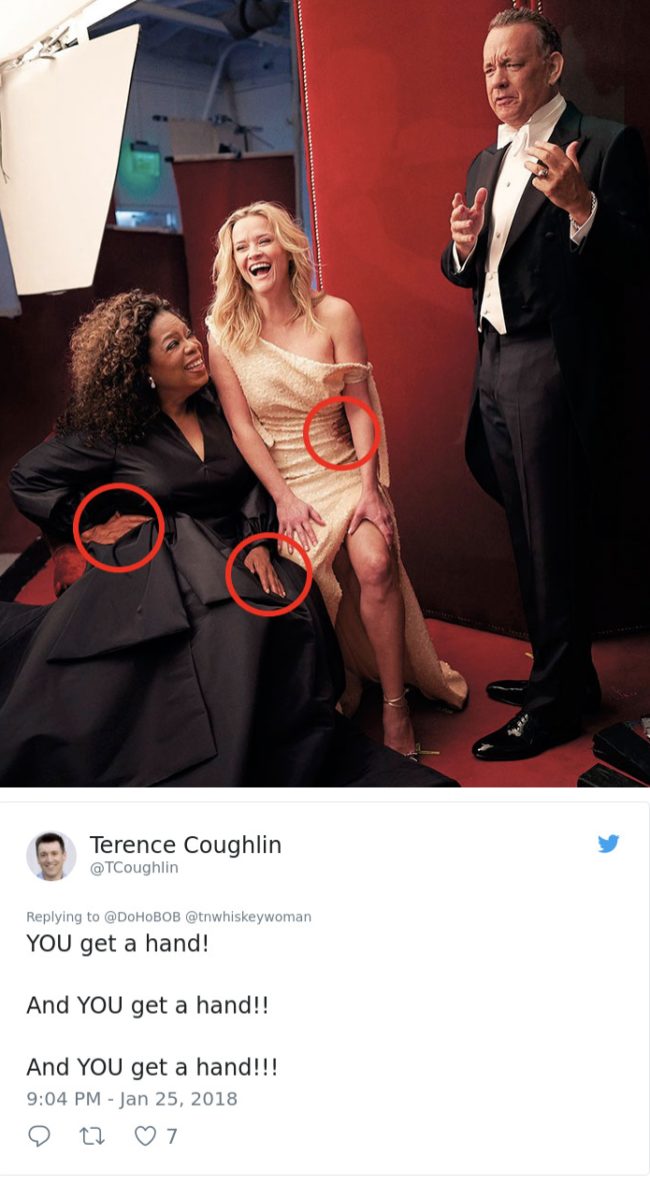 The Internet simply couldn’t handle the hilarity of the entire incident. While some were quick to point a finger at those responsible, others made their favorite celebrities the butt of their jokes.

This is as bizarrely slipshod a Photoshop job as I have ever seen. How many pairs of editors' eyes failed to notice this? You think, 'OK, that's the leg of the chair,' but no, it's tucked in @RWitherspoon's dress. (Poor @Oprah, will she ever get onto a _well_-Photoshopped cover?)

Youtuber Tyler Oakley took these editing blunders to show his support for self-love. There’s nothing wrong with being born this way!

oprah has three hands & reese has three legs, and we are here for accepting them for who they are!! 2018 is all about LOVING OUR BODIES!! pic.twitter.com/TX7L2JIDno

But Vanity Fair had the last laugh by taking to their Twitter page to make light of the hasty cover reveal.

Even the biggest names in Hollywood make mistakes, but we would totally understand if Reese had to get a third leg to help keep herself up after learning that Meryl Streep would be joining season 2 of “Big Little Lies.”