They Were Shocked When She Committed Suicide. Then They Looked At Her Paintings.

For the family of a 16-year-old girl in Georgia, life will never be the same because their bright, creative, and beloved daughter is gone forever.

The teen, whose identity is being withheld, appeared to her loved ones as a happy and well-adjusted person who loved creating art. That’s why they were so shocked when in May, she committed suicide. Her death was tragic enough, but when they later discovered something she’d been hiding, it grew even more devastating for them when they realized she may have killed herself as part of a sick online game.

After the girl died, her brother started going through her things to search for signs her family may have missed. He uncovered many disturbing drawings and journal entries containing suicidal statements, words written in Russian, and a photo of a blue whale with the phrase, “I am a blue whale.”

Those were the first clues that led her family to believe she had been a participant of the “Blue Whale Challenge,” a rumored set of online challenges that end in suicide. Then when they took a closer look at these abstract paintings she made for school, they found another clue. The teen had painted in skeletons of blue whales.

Starting two years ago, reports of an online suicide challenge in Russia began, but authorities still haven’t been able to confirm whether it actually exists or if it’s just twisted folklore. The 16-year-old’s suicide is believed to be the first in the U.S. motivated by the game.

People who participate are said to receive instructions from somebody online. That person gives them daily challenges to complete for 50 days, each varying in intensity. On the last day, the participants are supposed to kill themselves. This photo of the girl dangling her legs off of her family’s roof is believed to be one of those tasks. 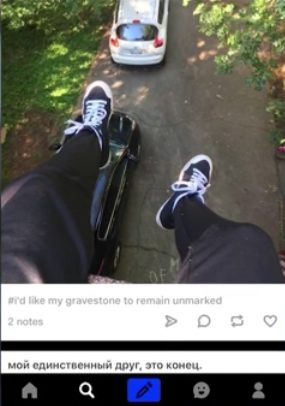 To learn more about the game and how to protect your children, watch the video below.

It’s heartbreaking that any kid would want to take their own life, let alone be encouraged by someone else to do it. Our hearts go out to the family who lost their daughter, and we sincerely hope that their tragic story will help spread awareness and potentially save lives.