He Answered A Simple Question, And What He Said Will Give You Goosebumps

There are some people who come and go from our lives but still make an impact.

Whether it’s a trusted adult from childhood, a friend who moved away, or just someone that you’re not in touch with anymore, the effect people have on each other is undeniable.

Quora is a website where people answer questions posed by others. When someone asked, “What is one moment in your life you thought could only happen in a movie?” Kevin Walsh knew he had to answer.

At summer camp, Kevin met a girl who would change his life forever.

They were in and out of touch all through high school, but they hadn’t spoken for more than a year when she called him out of the blue at a critical moment.

Some folks have asked where to find our full story: check my bio for the link to the original Quora answer

Here’s their full story. Get out your tissues!

Once upon a time I was 13 at a summer camp and the prettiest girl I’d ever seen walked right up to me and said “black is a good color on you.” No idea why. We chatted and became friends, exchanged AIM screen names (it was the time) and stayed in touch for a while.

We fell off each others’ radar some time in high school, but I can promise you that not a day went by that I didn’t think about that girl. Even now I’m not sure I can say why – something about her just stayed with me.

In my senior year I went through some dumb high school stuff that seemed earth-shattering at the time, and fell hard into depression. I resolved to take my own life, wrote a note and went to where I planned to end things.

Somewhere between 5 and 10 seconds before I would have committed suicide, my phone rang. I checked the caller ID – I couldn’t die not knowing. It was a number I didn’t recognize, so I picked up and it was her.

I asked her what was up and she said she just felt like she had to call me. At that point it had been a year since we had spoken, and at that moment she just had to call. Long story short, she pried, I spilled the beans and she talked me out of it. I mean she literally said “What? Don’t do that.” And that was that.

She made me promise to call her the next day, and we hung up. That night I started writing the words which, ten years later, I’d propose with.

That’s right, more than a decade later, these two have tied the knot and are living their happily ever after. 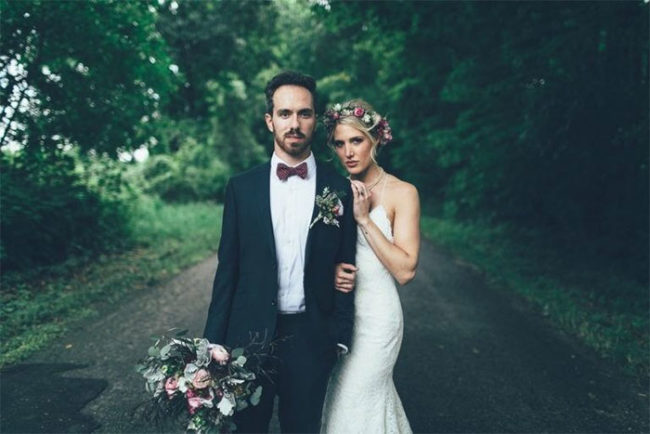 That’s what I call a movie moment. I’m so glad she was there for him during the time he needed it most. It’s so great to hear about this happy ending.