This Dog And Boy Have Something Amazing In Common — Now They’re Best Friends!

Rowdy the black Labrador lived most of his life as a normal dog with his family in Oregon, but when he turned 12, something strange started happening to his face.

The fur around his eyes began turning white in small patches, and within a year, they had developed into full circles. Nobody could figure out what was causing them until a veterinarian suggested it could be vitiligo, a long-term condition that causes patches of skin to lose their pigment and become white.A biopsy confirmed that he did have it — and now he’s raising awareness through the American Vitiligo Research Foundation and helping children with the condition to embrace their unique appearances.

For the past year, Rowdy has been inspiring Carter, an eight-year-old boy from Arkansas with vitiligo, to love his skin.Carter’s mom saw that he was struggling to accept his condition before — then she found photos of Rowdy online. 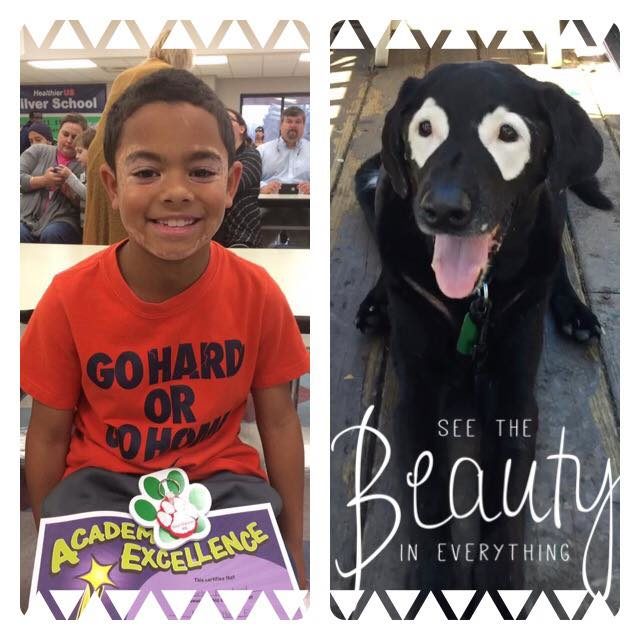 “I read that Rowdy had vitiligo and I was blown away, and when I showed Carter he was so excited to see a dog that was famous for his vitiligo,” Adcock said.

Prayers please!! Rowdy just had a grand maul seizure this morning! Heading to the vet now. 🙏😰

They’ve been keeping in touch with Rowdy’s owner, Niki Umbenhower, ever since.Carter hoped to someday be able to meet Rowdy in person, and when an anonymous donor heard about them, they decided to help them meet by donating $5,000 for travel expenses.

Hi everyone! Rowdy's Mom here…It's "National Pet Day" and I have to give a shout out to one of the most unique, handsome, adventurous, tough, stubborn, loving, loyal, inspirational dogs on the planet!! He has lived through several near death experiences and is now an ambassador for Vitiligo and I believe he has a very important purpose in his life!! Cheers to one of the most amazing dogs on earth! For real! One Of A Kind!! PC @saycheesedog #avrf #dogs #dogsofig #dogslife #dogstagram #dogscorner #dogsofinstgram #dogsofinsta #dogsofinstaworld #unique #handsome #adventurous #tough #stubborn #loving #loyal #inspirational #vitiligo #nationalpetday #nationalloveyourpetday #cutepetclub #doglovers #animaladdicts #worldofcutepets #mydogiscutest #nationalpetday #LoveYourPetDay #nationalloveyourpetday #oneofakind

When they finally got to meet, Adcock says it gave Carter a huge confidence boost and changed him for the better. “I have goosebumps when I think about the moment they walked through the door. I’m getting emotional, it’s amazing,” Umbenhower said.

“Really it was life changing for him,” Adcock said. “It changed his childhood for the better, it was a gift I couldn’t give him.”

Unfortunately, Rowdy suffered from a seizure shortly after meeting Carter.He will need tests including expensive MRI and CT scans to determine the cause of the issue.Umbenhower has set up a GoFundMe page for anyone who’d like to contribute to his medical expenses.

UPDATE ON ROWDY . Rowdy saw a neurologist in the ER today. They are not sure if it was a seizure or a stroke or something else. They did a lot of tests and without a "much needed" (expensive) MRI and CT Scan, we may never know. He could have a tumor or a mass causing a lot of his issues. . We left with them prescribing a new medication for seizures as well as some codeine for his pain. This could be age related, an isolated event, or he may have more episodes like today. . I want to thank EACH AND EVERY ONE OF YOU for the prayers, well wishes, and support! It is truly overwhelming to see the kindness and love this pup has from around the world! We love you all! Please continue to follow along the amazing adventure we are having with Carter and his mom from Arkansas! While Rowdy started his day with a scare and a trip to the ER, he was able to end it meeting up with Carter, another beautiful little girl Emma from Eugene, and some dear family friends for a play date and then squeezed in a photo shoot to boot. . This dog never ceases to amaze me with his resilience!!

Read More: This New Muppet May Look Like The Others, But Her Role Is Going To Be So Important

If you’d like to help Rowdy to keep inspiring others and stay healthy, you can donate to his care here.Please share his story with others who may like to contribute.