They Thought It Was Over When They Cuffed Her. Then They Saw Their Car Speeding Away

For most criminals, the only thing needed to restrain them is handcuffs. But as Texas police recently learned, this woman isn’t just any criminal.

On September 2, the Lufkin Police Department arrested 33-year-old Toscha Fay Sponsler on suspicion of shoplifting. After cuffing her and putting her in the back of a squad car, they assumed she’d sit tight — but she proved she’s much more difficult to detain than they thought.

Sponsler already made it clear she wasn’t going to be easily arrested when she ran away from police. When they finally caught up, they cuffed her on the ground.

But not long after she got in the squad car, she managed to free herself and climb into the front seat… 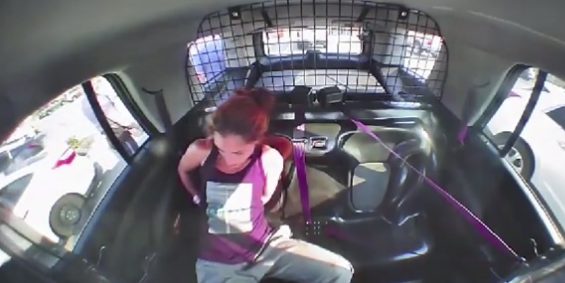 …at which point she drove off.

Sponsler ended up leading the officers on a 23-minute chase before crashing into a tree on the side of a road, when she attempted to reach for the shotgun that was mechanically locked to the vehicle. She even managed to avoid a spike strip!

The woman was arrested again and charged with five felony counts of escape with the threat of a deadly weapon, aggravated assault, unauthorized use of a vehicle, possession of methamphetamine, and evading arrest. Now the force is installing tactical windows between the front and backseats of all their cars.