Police officers are used to chasing and wrangling criminals every day, but huge snakes? Not so much.

Well, that’s exactly what Officer Joseph Cabrera of the Pembroke Pines Police Department found himself doing while responding to an emergency call on January 11. A nearly 13-foot-long Burmese python had been spotted on a Florida road near U.S. Route 27, and Cabrera was the lucky officer tasked with nabbing the large reptile.

Surprisingly enough, this wasn’t Cabrera’s first time wrestling with a giant snake. He was called out to collect another 13-foot python in April 2017. 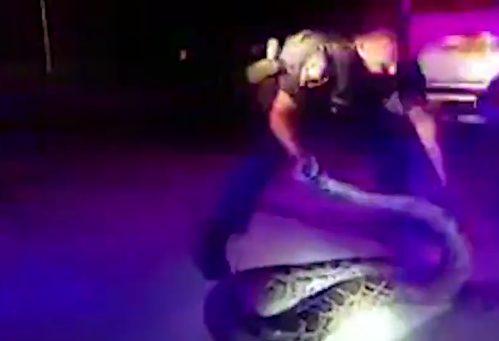 Watch as Cabrera does his best to apprehend the offending python, which was later picked up by a licensed python remover.

Here’s the big guy himself.

Snakes are not an uncommon sight to Floridians, but Burmese pythons are an invasive species & a real threat to local wildlife, pets, and even children. If you see a snake please do not approach it. If the snake is a danger to you or the surrounding area contact 911. 2/2 pic.twitter.com/62DVUxAvQK

I’m sure Cabrera would agree that there’s never a dull moment when you’re working as a police officer. Kudos to him and the other officers for removing the python safely without harming it.