Last month, a pregnant woman went to the Bilal Hospital in Mumbra, India, for a routine scan when radiologist Dr. Bhavna Thorat noticed an abnormal mass on her unborn son.

Nine days later, the little boy was born. That’s when Thorat performed another scan on him. What he found was a seven-centimeter-long fetus in the newborn’s abdomen — the result of an extremely rare abnormality called fetus in fetu, which only happens about once per 500,000 births.

“I could see bones of the upper and lower limbs of the fetus,” Thorat told Daily Mail. “The unique thing about it was I could see a tiny head with the brain inside. However, this parasitic twin didn’t have a skull bone.”

One theory about the condition is that the abnormal mass is a highly developed teratoma. The other is that with twins, one fetus becomes enveloped by the other. According to gynecologist Dr. Neena Nichlani, this was the case with the baby boy from India.

Surgeons at the Titan Hospital in Thane were able to successfully remove the mass. The baby and his mother are both currently recovering. 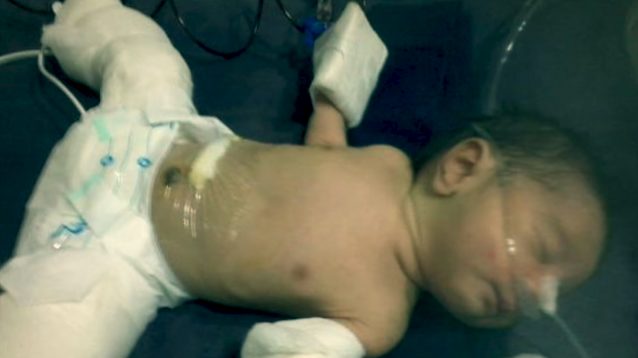 (via IFL Science and Daily Mail)

In cases like this, the parasitic twin can put the host twin’s life in danger because both get nutrition from the same umbilical cord. Thankfully, though, the baby boy is said to be doing extremely well.