On May 25, 1928, Albert Fish read an ad in the paper that was posted by a young man named Edward Budd…and then he decided that he would murderBudd. Fish, by then an accomplished rapist and murderer, visited Budd’s family under the pretense of offering the man a job. But when he met his 10-year-old sister, Grace, Fish decided to change his intended victim.

The following is the letter that Fish sent anonymously to Grace Budd’s mother after killing and eating the little girl. This is the document that eventually led to the murderer’s arrest. 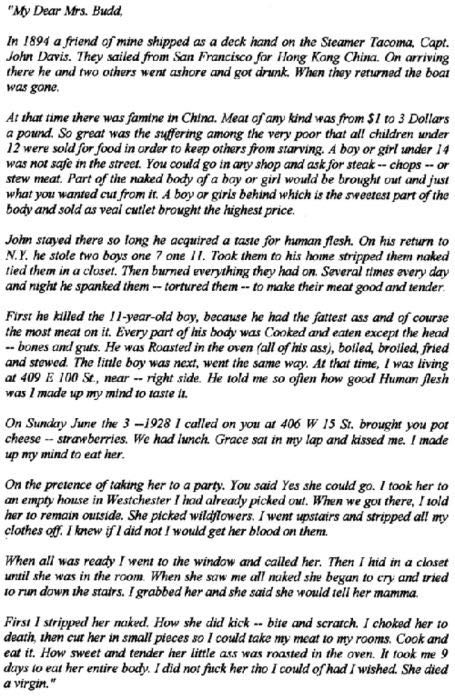 In 1894, a friend of mine shipped as a deck hand on the steamer Tacoma, Capt. John Davis. They sailed from San Francisco to Hong Kong, China. On arriving there, he and two others went ashore and got drunk. When they returned, the boat was gone.

At that time, there was a famine in China. Meat of any kind was 1-3 dollars a pound. So great was the suffering among the very poor that all children under 12 were sold for food in order to keep others from starving. A boy or girl under 14 was not safe in the street. You could go in any shop and ask for steak, chops, or stew meat. Part of the naked body of a boy or girl would be brought out and just what you wanted cut from it. A boy or girl’s behind, which is the sweetest part of the body and is sold as veal cutlets, brings the highest price.

John stayed there so long that he acquired a taste for human flesh. On his return to N.Y., he stole two boys — one 7, one 11. He took them to his home, stripped them naked, and tied them up in a closet, and then burned everything they had on. Several times every day and night he spanked them — tortured them — to make their meat good and tender.

First, he killed the 11-year-old boy, because he had the fattest ass and of course the most meat on it. Every part of his body was cooked and eaten except the head, bones, and guts. He was roasted in the oven (all of his ass), boiled, broiled, fried, and stewed. The little boy was next, and he went the same way. At that time, I was living at 409 E. 100 St. He told me so often how good human flesh was, and I made up my mind to taste it.

On the pretense of taking her to a party, you said yes, she could go. I took her to an empty house in Westchester I had already picked out. When we got there, I told her to remain outside. She picked wildflowers. I went upstairs and stripped all my clothes off. I knew if I did not I would get her blood on them.

When all was ready, I went to the window and called her. Then I hid in the closet until she was in the room. When she saw me all naked she began to cry and tried to run down the stairs. I grabbed her and she said she would tell her mamma.

First, I stripped her naked. How she did kick, bite, and scratch. I choked her to death, then cut her in small pieces so I could take the meat to my rooms, cook, and eat it. How sweet and tender her little ass was roasted in the oven. It took me 9 days to eat her entire body. I did not fuck her, though I could have if I wished. She died a virgin.” 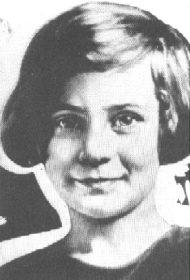 The story of Captain Davis and the Chinese famine was never corroborated, but the description of Grace Budd’s death was accurate. Police used the information on the stationery paper Fish used to locate and detain him. Fish never denied the crime. He was executed by the electric chair in 1936 in New York’s Sing Sing Correctional Facility.