Last week, the unthinkable happened when a newly designed and constructed footbridge and Florida International University collapsed right into the street.

Onlookers watched on in terror as the bridge carrying students and other pedestrians crumbled into the street directly on top of multiple cars that were stopped under it while waiting at a light. The story broke the nation’s heart immediately as horrific and hard-to-look-at images of mangled vehicles with victims trapped inside made the rounds on social media.

The Colorado company responsible for the bridge even tweeted just days before, bragging about the integrity of the structure. Those tweets were deleted after the collapse. Here is a video that’s since been deleted of the bridge’s integrity test.

Heartbreakingly, six people, including one FIU student, were killed in the disaster. 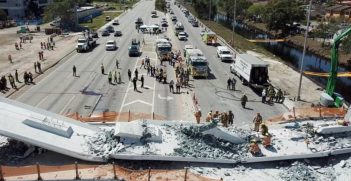 In the video below, you can see dash cam footage of the moment the bridge collapsed. Please be warned that this is difficult to watch.

Our thoughts go out to all of those who were affected by this preventable tragedy.