People Thought There Was A Ghost In This Video, But Here’s What’s Really Going On

It seems like every day there’s a new paranormal video waiting to go viral.

Whether it’s an old, abandoned hospital, or a suburban family’s house, the spirits just seem to be out in full force. And since it’s Halloween, it’s important to know that everything you see isn’t always what it seems. And while most haunted clips are less fact than fiction, a secondary school in Cork, Ireland, claimed that their latest closed-circuit television footage was in fact the real deal.

The Deerpark Christian Brothers School uploadedsecurity camera footage from their school that have many believing the school grounds are haunted. In the video, a “ghost” appears to be opening and closing doors. The now-viral video has been picked up by a variety of news outlets and has been viewed more than 12 million times in just a few weeks.

Speaking to the authenticity of the video clip, Aaron Wolfe, the school’s deputy principal spoke to TODAY and confirmed that he had no idea how the video’s content had occurred and that the school lacked the resources for large-scale green screen and editing techniques. Check out the video for yourself.

But the fact-checking sleuths at Snopes helped unearth some serious evidence that suggests this is a fake.

In the days following their viral hit, an image was uploaded to the school’s Facebook page showing the allegedly haunted hallway.The image provides a wider perspective of the hallway and even showcases the security camera that reported captured the ghostly incident. 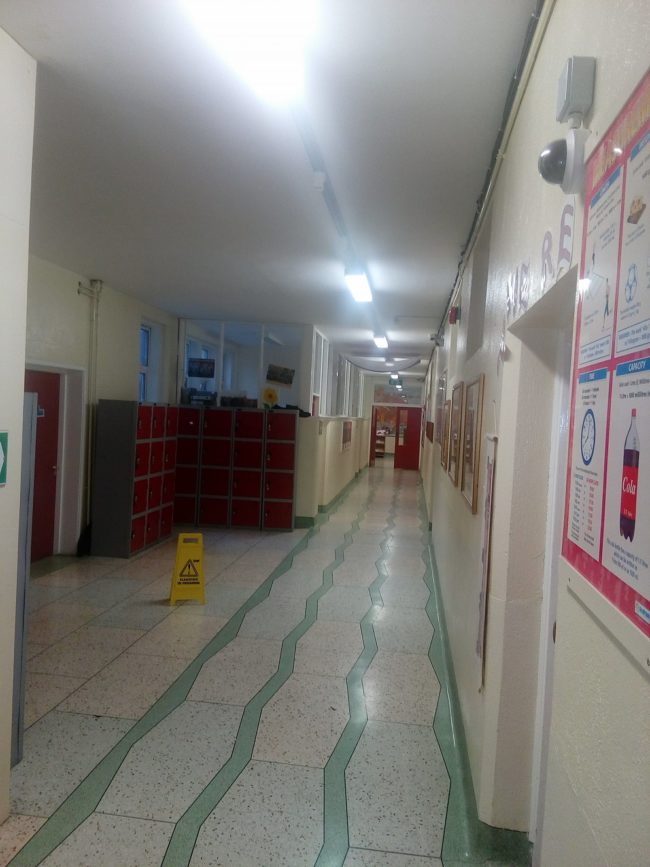 The first questionable detail that doesn’t sit well with the Snopes gang is the placement of the security camera. They believe that the placement does not match up with the position of the camera used in the video. The ghost footage was shot at eye level, while the camera is mounted several feet above the door. It’s more likely that the ghost video was shot on a tripod located in the middle of the hallway.

Another obvious clue that the viral video is fabricated appears when the wet floor sign is seen being tampered with. If you look closely, you can notice that in those few seconds of footage, the floor tile pattern disappears, almost as though it had been edited out and quickly replaced. 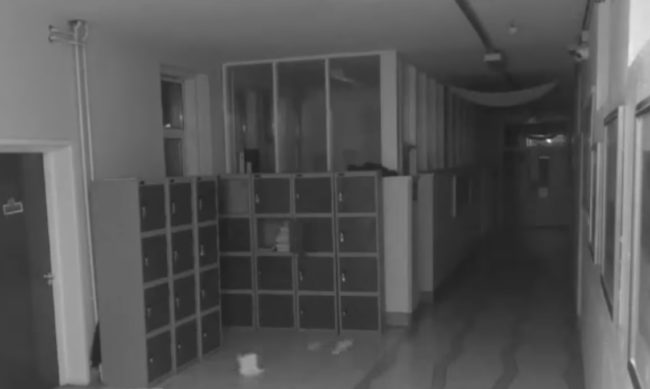 Also, unless the ghost is able to make locker doors disappear for seconds at a time and then magically make them reappear, then this video is a phony. 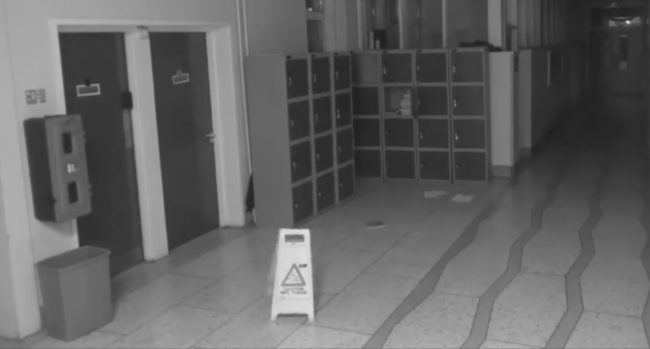 This all comes conveniently close to the school’s upcoming “Fearpark” event. What better way to draw attention and rack up attendance than by releasing a viral video showcasing spirits roaming the halls?

Lots of preparation for FEARPARK going on in the Art room #FEARPARK #Art #Halloween 👻👹🎃 pic.twitter.com/e1S7B0sYLL

It never fails that when there’s a mystery or rumor to be resolved, Snopes is always on the case. While it’s quite obvious this frightening video is a fake, we have to applaud these teachers and students for putting in the effort to scare up some viral fun.