A Neighbor Was Suspicious Of This Mom. What They Found In A Drug House Is Sickening.

Earlier this month, 31-year-old Ashley Baskett’s neighbor in Cocoa, Florida, became worried about the welfare of her baby, and for good reason.

When the woman went to a nearby suspected drug house to talk to the occupants about a theft, her suspicions about Baskett were confirmed. People inside the building were either sleeping or appeared to be under the influence of drugs, but what really shocked her was what she saw lying on an old mattress.

Baskett had left her one-year-old son there for at least three days without any food or diapers. Nobody inside had been caring for him at all in that time. “Upon meeting with the complainant, deputies observed the child’s diaper visibly saturated with urine and the child’s clothing dirty. The child also had unidentifiable marks on his face,” said Brevard County Sheriff’s Office PIO Tod Goodyear.

After the neighbor took the baby to her home and called 9-1-1, a deputy from the Brevard County Sheriff’s Office bought diapers, baby wipes, and a bottle for him. Officers then found and arrested Baskett for child neglect and possession of methamphetamine. 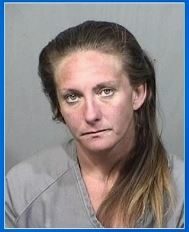 Read More: He Collapsed And Died In Class. What Killed Him Is Probably Sitting In Your Fridge.

To learn more about this disturbing case, check out the video below.

The little boy is now being cared for by the Department of Children and Families, but things could have ended much worse for him if the neighbor hadn’t been there to help. Share if you’re infuriated that this helpless child was left alone in such an awful environment.