She Saw A Big Man Pushing A Baby Doll In His Cart. You’ll Melt When You Hear Why!

People come in all shapes and sizes, and we often make assumptions based on appearance.

We know it’s wrong, but it’s a hard habit to overcome, especially in public. One Goodwill employee,Sadie Jessica Marie Collins, saw a tall and bulky man with a beard wander into the store one day. The name tag on his mechanic-style shirt said “Punisher.” Then she noticed one peculiar thing — strapped in the top portion of his cart was a baby doll without clothes. She decided to ask him what he was doing.

As it turns out, the doll belonged to his daughter, who was insisting that he wear clothes and socks. So “Punisher” did what any great dad would do and went out to get him clothes. 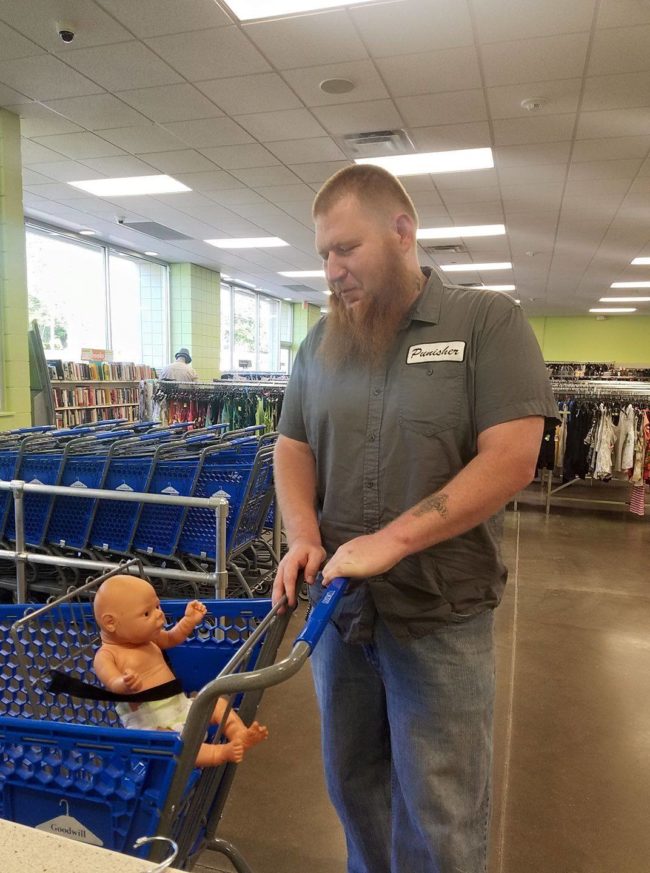 Collins was so moved by his dedication to his daughter. Read what happened in her words below.

“So, this guy comes into Goodwill today. He’s a big dude. He has tattoos on his neck and arm and even a skull tattoo the size of my entire hand on the back of his head. His name tag says “Punisher” and everything about him screams burliness and manliness yet, here he is, at Goodwill with a baby doll strapped safely in the cart as he shops for clothing.

When I asked him about it, he told me it was his daughter’s baby doll named Davey and that she wanted him to have clothes and socks so he got in his car, and drove here and bought Davey two onesies and then went to Walmart and bought him some socks as well. I couldn’t believe how well he treated his daughter’s baby doll. It was incredible. I can only imagine how well his daughter is cared for if he’s willing to care for her toys this well. I just think amazing parenting like this deserves recognition. This man sucked up all of his pride and went out of his way to clothing shop for a baby doll just to make his little girl happy and if that’s not love I don’t know what is.”

This story just goes to show that you can never judge a book by its cover. I know his daughter will appreciate everything he does for her. Share his dedication and this adorable story with the amazing parents you know.