For parents, most tough situations, no matter how small, become opportunities to give their children a little wisdom about life.

When your kids really want something, for example, it’s very tempting to buy it for them and be rewarded by watching their happy little faces light up with joy. But when they come to the realization that they can’t always get what they want, they learn a lesson much more valuable than their sought-after prizes.

That’s exactly what Ohio mom Brea Schmidt was trying to teach her daughter. While the little girl was trying to win a carnival prize, she put a limit on the amount of money she’d spend on tickets to play. However, her lesson changed into one about kindness when a generous stranger stepped in.

When the little girl was down to her last ticket, which would tell her whether she’d won a doll, she opened it to find that she hadn’t. After she burst into tears, Schmidt hugged her and prepared to give her the talk about how we can’t always win. 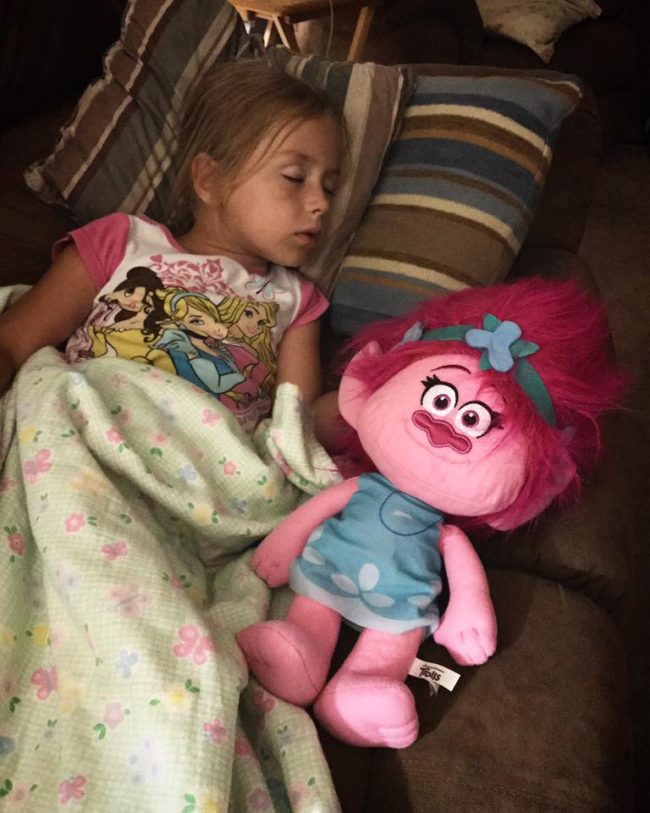 But when another mom handed her daughter a dollar for one more try, Schmidt was able to teach her something even better. Read the story as she tells it in her own words below.

Last night my girl was playing a game at the church festival in my hometown… trying desperately to win a Poppy doll by buying three-for-$1 tickets that she would open and find out whether or not she was a winner.

Every time we tried, we lost… and each time she sweetly asked for another dollar for another try, until it got to the point where it had been enough. She knew it was her last dollar, and on the very last ticket she had, she opened it slowly, holding it up close to her face to peak inside and see if the magic number was there.But it wasn’t. Again. And despite her efforts to hold it in, she fell into my arms in tears. And God love her. She was exhausted. And she’s a five year old kid who really wanted something, and was feeling all of the disappointment of not getting it.We’ve all been there. I held on to that sobbing hug for a while. First, I kind of smiled as she melted into my shoulder in despair… thinking about how nice it would be to have my own most current stress in the world be the lack of a Poppy doll in my life. Then, with another dollar burning a hole in my pocket, I thought about the memories I had as a kid when it was me who couldn’t win the carnival game with the prize I wanted … and considered helping her avoid that sadness by standing at the dang booth and paying whatever I needed to until until my daughter won. But finally… about ten seconds into our hug… I got to a point where I knew I had to keep that dollar bill in my pocket and give her the life lesson speech. The one about not winning all of the time. About accepting that there are things that you want, and no matter hard you try, you still might not get them. The one about appreciating all of the dollars from Nana, Papa and Mommy that even let her play in the first place. Then I heard the voice of a fellow mom who saw my daughter’s tears and had been watching her open all of those tickets with excitement. She says, “You know what, honey, I have a dollar and I’m going to give it another try for you.”My girl speed-lifted her head off my shoulder and started twirling her hands the way she does when she’s excited.The woman grabbed a dollar from her personal wallet, snags the three-for-$1 ticket from the bucket of tickets… and no joke opened a winning ticket.The look on my daughter’s face was the absolute best. Nothing but pure, 5-year-old thrill shining through the leftover tears and snot on her face. She picked out her doll, hugged and thanked the woman, asked to call my husband to tell him about it, and halfway through the walk to our car said, “Mommy I can’t believe I have Poppy,” and gave her the biggest hug.So maybeeeeee we missed the “you don’t always get what you want lesson” last night. We’ll save that one for another day. But I made sure she didn’t miss the other one served up to her. I asked her, “What do you remember about that lady who bought you the extra tickets?”She says, “She did something nice for me.”ME: “And how did that feel?”HER: “Really good.”ME: “So what did you learn about what you should you do the next time you see someone sad?” HER: “Do something for them so they’re not sad anymore.”While that woman threw a wrench in my original life-lesson-dealing plan, the one she had stored in her heart was just as important.Because as my girl heads off into kindergarten in a month, I know she’s going to be put in different social situations that she’s going to have to figure out.And if one of those situations lands her in a spot where she sees a fellow classmate feeling sad…. maybe she’ll remember the woman at the Poppy booth… and reach into her heart to find a way to help her friend feel better.

While being able to accept when things don’t go our way is something everyone needs to learn, being compassionate towards other is definitely just as important. Something tells me this little girl is going to grow up to be a very kind young lady.