Canadians Are Asking Kids To Send ‘Naked’ Pictures, But It’s Not What You Think

Sexting among teenagers is a real problem.

Not only do children not realize the implications of sending each other nude photographs, but there can be additional issues that arise. The first is that if disseminated, pedophiles can find the photos and continue their spread. In some places, this means that the children who originally took or sent the photos can be prosecuted for creating and distributing child pornography. They may end up on sex offender lists for life, all because of one stupid decision.

That’s why in Canada they’re taking a hilarious approach to preventing teens from sending nude pictures, and it’s just funny enough that it might work.

This is a naked mole rat. In addition to being hilariously lacking in the fur department, they also can look suspiciously like genitals.

‪This is probably the only way I can post nudes on social media without losing my job #nakedmolerat #thuglife @RiAus Find out more about the latest mole rat discovery here: https://www.australiascience.tv/vod/brew-ha-ha-naked-mole-rats-sfw/ ‬

The Canadian Centre for Child Protection has started a campaign urging teens to send each other “naked” pictures…of naked mole rats instead of their own bodies.

They’re using the funny meme as a way to educate about sextortion and give kids an alternative when someone asks for “nudes.”

Canadian schools cover comprehensive sex education, making these campaigns just one more part of the conversation adults are having with kids about what’s healthy for them and thinking about the future. 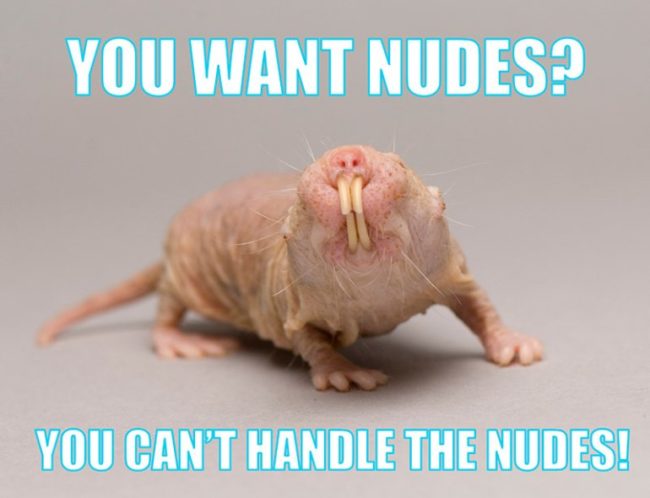 Naturally, they’ve also created a hilarious PSA to go along with the images.

Here’s hoping this effort gets kids to think twice about how they’re communicating online and over the phone. It certainly caught my attention! Share this with the parents you know so they can help keep their kids safe.