Remember when all that anyone could talk about was this damn dress? 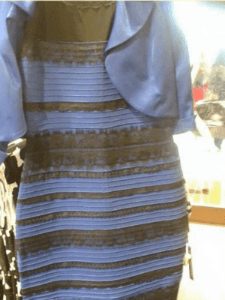 The item of clothing sparked a huge debate about whether it was black and blue or white and gold, and it made us realize that different people see colors in different ways.

Something known as color constancy is to blame for the arguments about the dress that spread all across the internet. It’s a feature of human color perception that helps us identify familiar objects in varying degrees of light by perceiving them as having a consistent color whether they’re in the sun or the shade.

That said, you still might not believe that there isn’t actually any red in this blue-tinted photo. It’s truly only composed of shades of green and grey.

Strawberries appear to be reddish, though the pixels are not. pic.twitter.com/Ginyhf61F7

Read More: There Are 12 Soldiers Hiding In This Picture, But Hardly Anyone Can Find Them

“Your brain says, ‘the light source that I’m viewing these strawberries under has some blue component to it, so I’m going to subtract that automatically from every pixel.’ And when you take grey pixels and subtract out this blue bias, you end up with red,” said Bevil Conway, an expert on visual perception at the National Eye Institute.

My mind has officially been blown — I swear I’m seeing red!Be sure to share this cool optical illusion with all your friends to find out what they see.