He Walked Miles To Get His Wife A Kidney, But When She Got One, He Kept On Going

Two years ago, Wayne Winters and his wife of 26 years, Deanne, received devastating news. Deanne had been diagnosed with stage 5 kidney failure.

Her name was placed on the kidney transplant list, but like everyone else waiting for an organ, she was at risk of dying before receiving one. According to the National Kidney Foundation, more than 3,000 new patients are added to the kidney waiting list each month, and 13 people die every day waiting for a transplant. Knowing this and watching his beloved wife suffer through dialysis, Winters knew he had to do everything he could to save Deanne’s life.

That’s why beginning in October, the 74-year-old walked the streets of Farr West, Utah, for miles every day carrying a sandwich board that read, “Need Kidney 4 Wife,” listing his phone number along with Deanne’s blood type.

Though he hoped his efforts would catch people’s attention, he had no idea he would get such an overwhelming response. He received hundreds of calls from people who wanted to help his wife. “Between 7-800, it filled my phone up. I’m sitting here with this full phone,” Winters said.

On November 5, Winters and his wife finally got the call they’d been waiting years for. A kidney donor had died, saving Deanne’s life. However, Winters wasn’t finished yet. 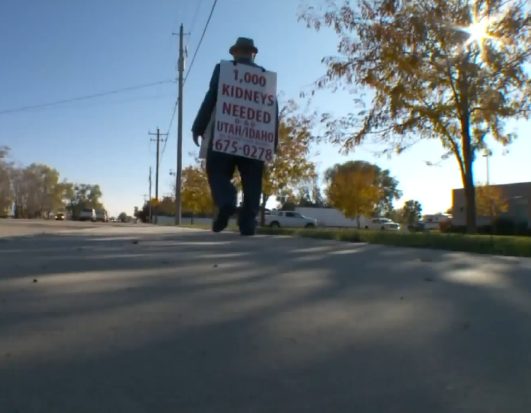 Before receiving the call, he told Fox 13 that if his wife did get a lifesaving transplant, he’d keep working on his mission to encourage people to donate kidneys. He kept that promise. More on this story below.

(via Fox 13 and BoredPanda)

Winters still plans on walking to help other families in need. As he puts it, he believes “we could start a kidney revolution.” What a wonderful man. To learn more about kidney and organ donation, click here and here.