Most of us wear our makeup to bed on occasion. We may come in and just be too tired to wash it off so we just go to bed. We know that we shouldn’t do it but we do it anyway. Of course, we don’t typically leave our makeup on every night but that isn’t the case for all of us.

As an example, this Australian woman managed to wear her mascara every night to bed for 25 years. She started when she was 25 years old, and now that she is 50, she reached somewhat of a milestone in life. 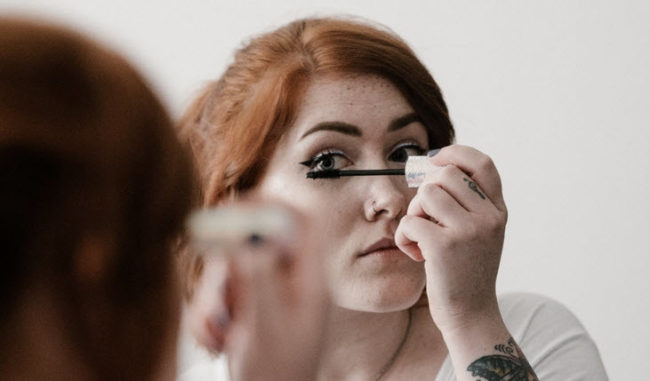 When you see these pictures, you are going to realize just how dangerous it can be to fall asleep without removing your makeup. Teresa Lynch didn’t intend on being a warning for us in this regard, but you may never wear makeup to bed again.

She decided to visit the doctor after having a strange sensation in her eye. She described it as being as if something was stuck in her eye and she couldn’t get it out. When the doctors examined her, they were shocked at what they saw. In fact, she even ended up as a case study in the American Academy of Ophthalmology. In that study, Lynch admitted that she wore heavy mascara for 25 years with “inadequate removal.” 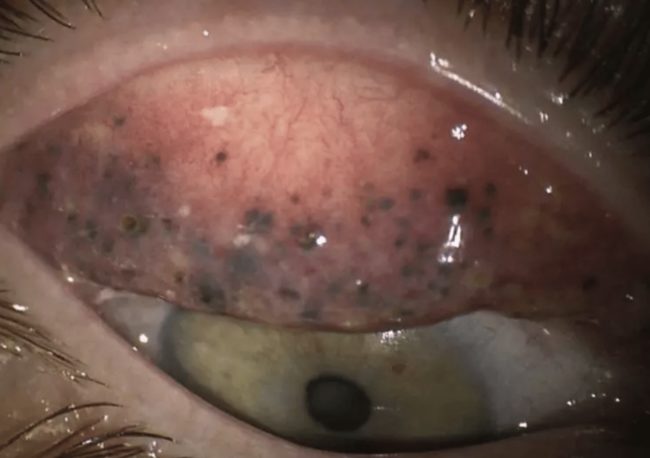 Dr. Rebecca Taylor, a clinical spokesperson for the AAO and an ophthalmologist had the following to say: “The concretions got embedded in the conjunctiva and it went deeper into the subconjunctival layer, but you could still see it, sort of like a tattoo. She basically had these rough things stuck on the underside of her upper eyelid so every time she closed her eyes it would scratch her eyeball, particularly the cornea.” 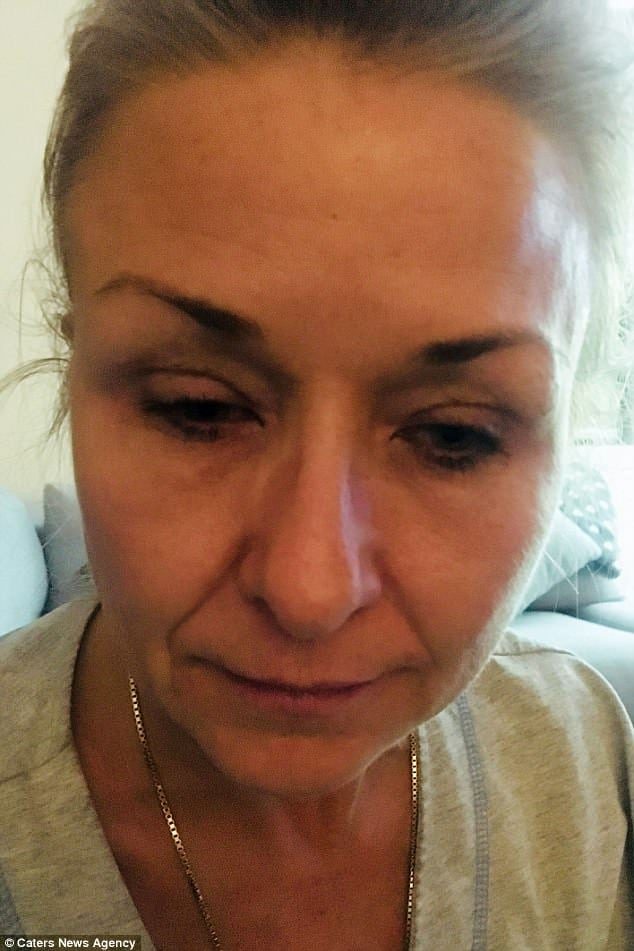 If that wasn’t enough, she was also dealing with a nasty case of follicular conjunctivitis. This is a type of bacterial infection that takes place on the follicles in the conjunctiva.

The mucous membrane that covers the eye is the conjunctiva and it protects the eye from infections. Because of the issues associated with her problem, permanent scarring has occurred on the inside of her eyelids. It has also scarred the surface of the eye. 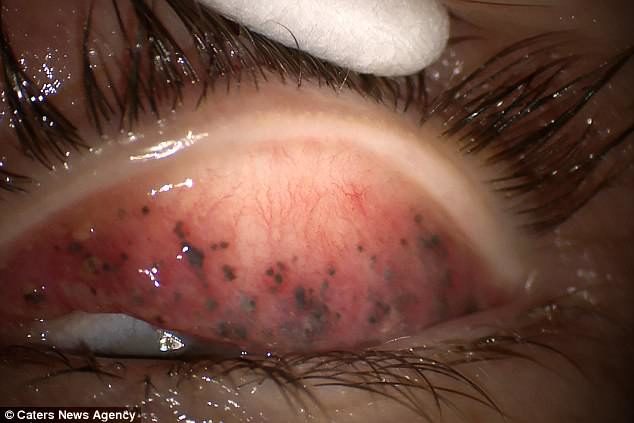 A 90-minute procedure was necessary to remove the larger lumps that had built up under her eyelids. They were embedded deeply into the area, building up on top of each other. Lynch claims that it was “so uncomfortable,” and we could imagine so.

The doctors were really surprised when they looked at Lynch’s eyes. 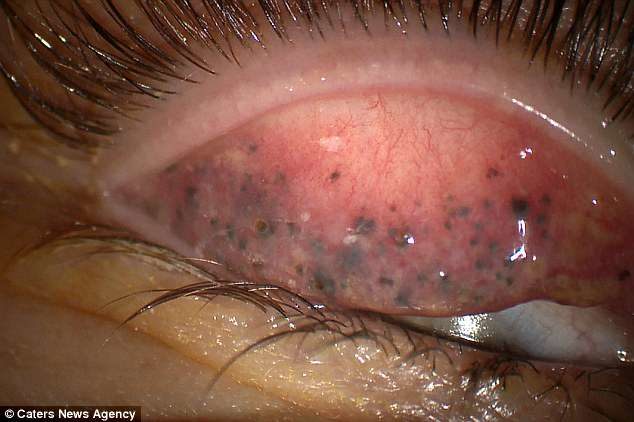 Lynch said: “My eyelids were swollen and heavy because I left it for so long. When Dr Robaei pulled my eyelid back, she said: ‘Oh my god.. In my whole career I have seen anything this.’ She could see the whites of my eyes were glassy and bloodshot. I had fallen into a bad habit of wearing a lot of makeup and not washing it off. I should never have let it get this far. It’s so important to properly take your makeup off every single night. You can’t miss a single day.”

It seems as if she has learned her lesson. She is going to change her makeup habits from this point forward. 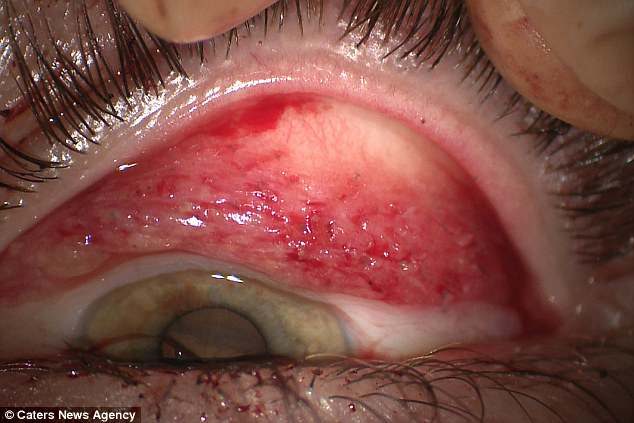 Her case is more of an exception than the rule. Of course, very few people ever wear eye makeup to bed every night for 25 years!

Prof. John Dart from the UCL Institute of Ophthalmology had the following to say: “Mascara, like many cosmetics, contains a lot of components, many of which are potentially toxic: Carbon black or iron oxide pigment to darken lashes; a polymer to form a film that coats lashes; a preservative; and thickening waxes or oils such as lanolin, mineral oil, paraffin, petrolatum, castor oil, carnauba wax, and candelilla wax.” 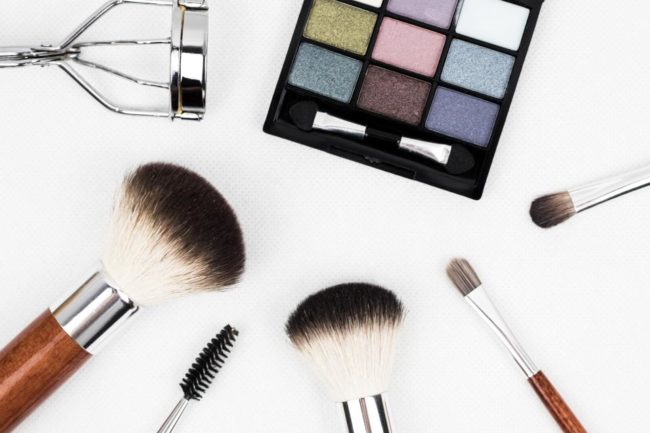 Dart says it isn’t a big deal if you sleep with your makeup on for one night. You should, however, make a habit out of washing your makeup off before bedtime. He also says that you should not share your mascara with others.

If you leave your eye makeup on at night or if you know somebody that does so regularly, this is a good warning. Having some makeup removal wipes handy will help you to get the job done, even if you come home tired.