You’ve Probably Seen These Cute Bear Videos, But The Process Behind Some Is Awful

You may have recently seen footage of a funny-looking bear walking just like we do at a wildlife sanctuary in Laos, but the probable reason behind his behavior is tragic.

According to Liz Jinata, a veterinarian and animal communicator who’s observed the video of the Asiatic black bear moving around on his hind legs, it’s very likely that he was previously subjected to horrific living conditions at a bile farm, and that his malnourished body makes it easier for him to stand that way. These places in Southeast Asia harvest bear bile by keeping the animals in small cages that stop them from standing, sitting upright, or even turning around, and only give them enough food to keep them alive — and all for the sake of using it in traditional Chinese medicine.

“With this living condition it’s not surprising that he’s malnourished, which is shown by how short his legs are and the body size is disproportionately small for his head size. He is much smaller than an adult Asiatic black bear of his age should be,” she wrote. 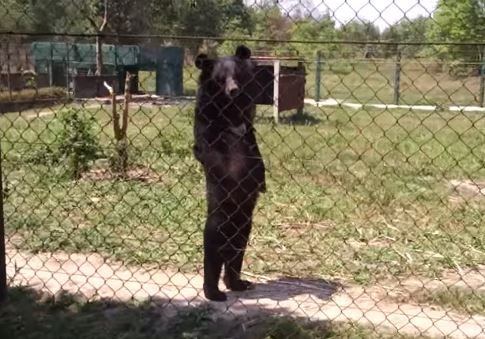 She also says that before his home was a rescue center, it was a zoo where visitors could feed animals by throwing food into their enclosures. Much like the starving sun bears shown begging below at the Bandung Zoo, she says that “standing up and waiting for food slowly became a habit which he does on a daily basis now.”

While we can’t say for sure whether the same is true for other bears walking this way, it’s important to remember that this behavior could be the product of animal cruelty…

Why it look like he saggin 😂 "Back At It: Oak Ridge Nj Bear Spotted Again Walking Like A Human!" #BearWalking

…or even a sign that they need medical help.

Take this bear, for example. People were baffled when they saw him walking like a human in New Jersey, but it turns out that the creature’s front paws were likely injured.

For more information about how you can help bears on bile farms, click here, and be sure to share this article with others to raise awareness about their cruel practices.