They became famous on Family Guy as “wacky waving inflatable arm-flailing tube men.” My mom refers to them as “happy flappy whiplash men.” Their official name, and it’s up for debate about whether or not they have one, is largely unknown (although the general consensus seems to be that they’re male). But you know what I’m talking about.

You’ve probably seen them in used car lots, or other places looking to grab your attention. They’re tall, tubular figures with a pair of arms and a silly face, powered by a fan blowing air up into their bodies so they can flap and flail in the wind, looking like a neon-colored noodle. You might think they’re funny, or you might think they’re tacky. Houston thought they were so tacky that the city banned them, referring to them as “visual clutter and blight.” Whatever you think of these exuberant tube people, you’ve probably wondered: Who thought of this bizarre thing? 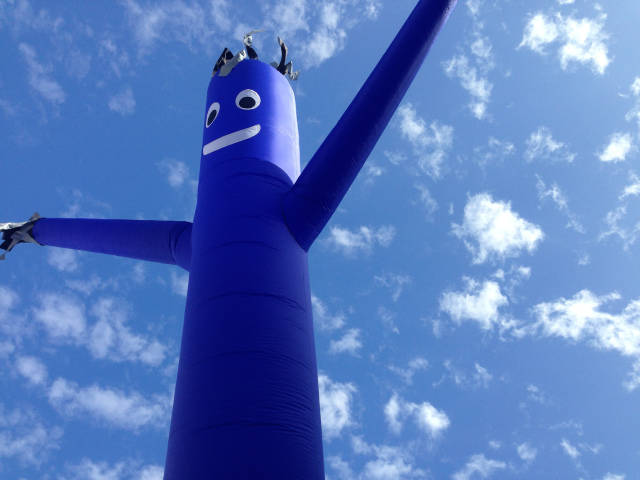 In fact, they gave a surprisingly cultured background. It all begins with a man named Peter Minshall, from Trinidad and Tobago. Minshall was known throughout his home and in places abroad for his work as a mas man. This term is used in Trinidad for someone who creates artwork for carnivals. Minshall was known for creating huge puppets that would dance in time to the music of carnivals. In 1995, he was hired to create for the opening ceremonies at the 1996 Atlanta Olympics. After some trial and error, he came up with an inflatable tube figure that, when hooked up to an air supply source from below, would dance. Minshall christened them “tall boys.” With the help of L.A.-based Israeli artist named Doron Gazit, the tall boys became a reality, and debuted at the Olympics. 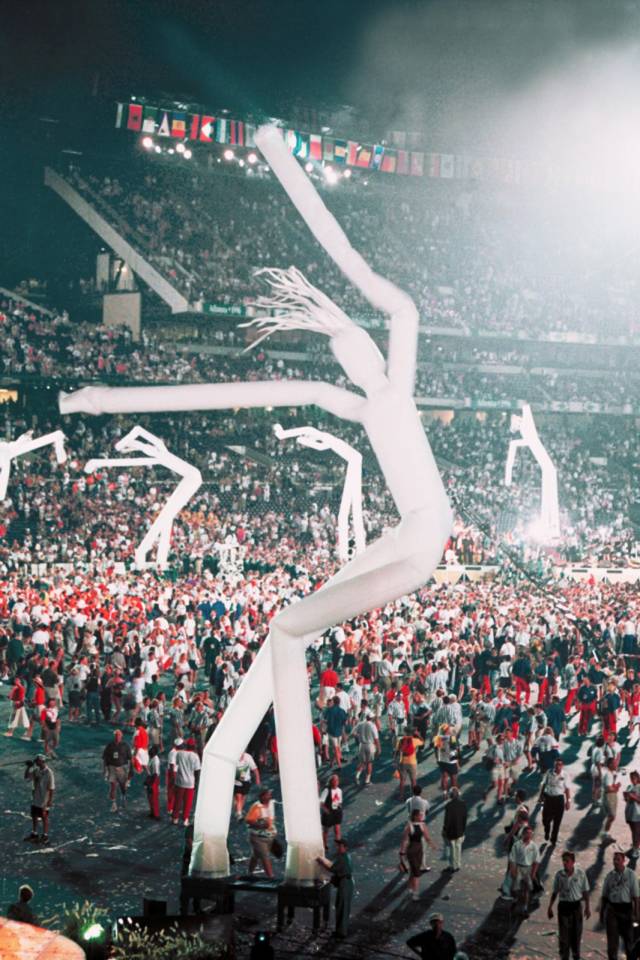 Minshall’s “tall boys” dancing at the 1996 Olympics in Atlanta. Unlike their descendants, these tube men have two feet instead of a single stem.

After the Olympics, Gazit ended up patenting the tall boys, which he called “flyguys.” This caused a bit of tension between the designer and the fabricator. But other people were already duplicating the design, and suddenly, the tall boys/flyguys were popping up everywhere, doing their silly dance. Gazit’s company licensed the patent to a number of companies, and thus a surge in the undulating tube man population was born. One company calls them “Air Dancers.”

Besides catching your eye in the hopes of selling you a pre-owned Ford, the tube guys were also discovered to have a surprisingly practical use: they make really good scarecrows. While maybe not as picturesque as the classic straw-stuffed variety, they’ve proven to be extremely effective at protecting crops from birds.

The “Air Rangers,” as they’re known, are a modern take on scarecrows, and are really effective. To differentiate them from the happier “Air Dancers,” these come with a more menacing (to birds, anyway) face and reflective strips on the ends.

So whatever you might think of them, take a moment to appreciate the history of the tall boy, the flyguy, the Air Dancer, the Air Ranger, or whatever name you’ve come up with for them. And if nothing else, you might be able to make a great costume for next Halloween: