When most of us see a stranded animal on the side of the road, pangs of guilt and sympathy weigh on our heart. The rare few will actually slow down, get out of the car, and help. Usually, we make ourselves block those feelings out after a moment and tell ourselves there’s nothing we can do.

But when one Kansas City police officer noticed two pups on the side of a busy highway, he became their hero simply by staying by their side.

The officer stayed in the cold with the clearly exhausted dogs, keeping them company while they waited for members of the local animal shelter to arrive. 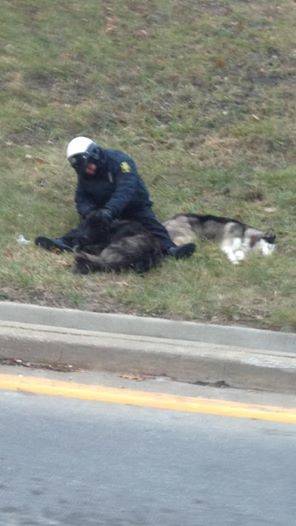 The image spread across Facebook after being posted by a Kansas City resident who was moved by the officer’s kindness. Luckily, the pups, Bear and Leonidas, were soon reunited with their owners who went to the shelter hoping to find them. Most owners, sadly, aren’t so lucky. The officer chose to remain anonymous, apparently saying that it was simply his duty to protect not only the humans, but also the four-legged citizens of Kansas City. A local news segment shows just how grateful the owners and their furry friends were for his selflessness.

To learn more, check out the video below!

It’s amazing what even the most simple acts of kindness can accomplish. Hopefully these guys have learned their lesson about straying too far from home.