If You’ve Ever Struggled With Your Family Christmas Card, You’ll Love What She Did

While some enjoy sharing all the awesome things their family’s been up to via snail mail, their recipients don’t always feel the same. It can be annoying to read letters from friends and relatives bragging about their kid’s academic achievements and all the vacations they’d been on that year. That’s what makes this mom’s brutally honest description of her husband and children so great.

Lisa’s just telling it like it is in what I’d consider the best Christmas card ever. (Side note: who has a three-year-old after being married for 41 years?! Those poor parents.) 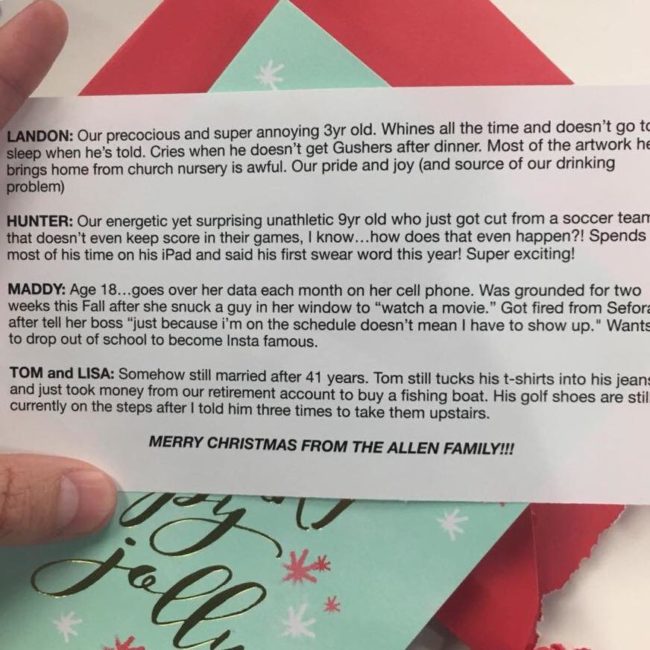 If you’re having trouble reading from the photo, here’s a transcript:

Landon: Our precocious and super annoying 3-year-old. Whines all the time and doesn’t go to sleep when he’s told. Cries when he doesn’t get Gushers after dinner. Most of the artwork he brings home from church nursery is awful. Our pride and joy (and source of our drinking problem).

Hunter: Our energetic yet surprisingly unathletic 9-year-old who just got cut from a soccer team that doesn’t even keep scores in their games, I know…how does that even happen?! Spends most of his time on his iPad and said his first swear word this year! Super exciting!

Maddy: Age 18…goes over her data each month on her cell phone. Was grounded for two weeks this fall after she snuck a guy in her window to “watch a movie.” Got fired from Sephora after telling her boss “just because I’m on the schedule doesn’t mean I have to show up.” Wants to drop out of school to become Insta famous.

Tom and Lisa: Somehow still married after 41 years. Tom still tucks his t-shirts into his jeans and just took money from our retirement account to buy a fishing boat. His golf shoes are still currently on the steps after I told him three times to take them upstairs.

Merry Christmas from the Allen family!

This is much more accurate than any Christmas card I’ve ever received. I have to wonder, though, what are the juicy details Lisa is leaving out about herself?