‘I’ll Save You!’ Adorable Bulldog Tries To Save Her Favorite Actor From Bear Attack

One of the most talked about movies last year was “The Revenant.”

It’s a story about survival, and after always coming up short in the past, the gritty film finally won Leonardo DiCaprio his first Oscar for Best Actor. There’s one scene in the movie that I heard about way before entering the theater, however, and that’s the scene where DiCaprio’s character is attacked by a bear.

One English Bulldog named Khaleesi hilariously watches movies just like a human. But when it comes to “The Revenant,” she’s not going to take an assault on Leo lying down.

Khaleesi is watching the dramatic scene carefully. When the bear comes into view, she perks up a bit. 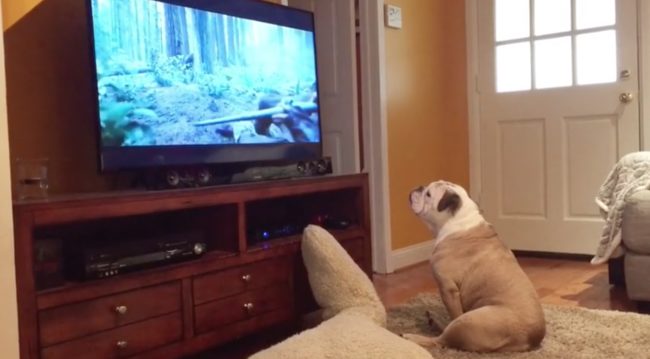 Watch her try to ‘save’ DiCaprio from the bear in this hilarious video!

She’s too funny. Do your dogs react like this to movies? Let us know your hilarious stories in the comments!