Those of us who’ve never met or known someone with Alzheimer’s can study and read about the disease all we want, but we’ll never truly understand how devastating it is until we see it for ourselves.

One young woman, Redditor wuillermania, was forced to experience the heartbreaking reality of the disease when she was just 22 years old. At the time, her 54-year-old mother was diagnosed with early-onset Alzheimer’s. She’s been living with it for the past 12 years. Words can’t fully describe how difficult it was for this woman to watch as her mom eventually forgot who she was, but she explains there’s one powerful visual representation that says it all for her.

“I’ve often explained watching my mom succumb to this illness as watching her unravel,” she wrote. “When I came across the crocheting she did in the early stages of Alz, it made me realize how fitting that actually was.”

“I don’t remember exactly when she stopped being able to crochet for good–she made squares for a while, then the circles, then the little pieces of crochet, until she got to the point where she just carried around the needles and yarn in her purse,” she added. “At this point she is completely non-verbal and unable to care for herself in any way (eating, bathing, dressing, walking unsupervised, etc.).” 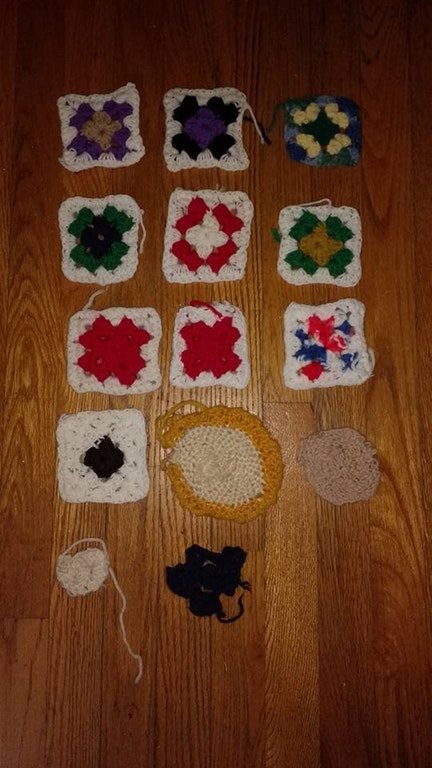 Her image had a powerful impact on those who saw it, inspiring others to share their own fears and stories about the disease:

“This is seriously one of the most frightening things I could possibly think about. Everything that makes you a person simply fades away. Alzheimer’s runs in my family too. Very sorry for you indeed, OP. I know what it feels like. Hope you’re coping ok.” —FatGreek

“Wow, I’m so sorry for you. What an amazing visual for a concept that can be really tough to grasp.” — brownmlis

“Op, I completely see my grandfather in this post. He died from complications of Alz last Christmas. He was an extremely well read man and as long as I could remember he always had a stack of books, newspapers and magazines next to his recliner. As he declined, at first the pile was the same, but the issues were there a little longer. Then there were fewer magazines. Then the books stayed on the shelf and finally the daily paper wasn’t even read. By the time he died I don’t think he’d read anything in about a year. Keep fighting Op.” — Like_meowschwitz

I can’t imagine how difficult it would be to watch a parent slowly deteriorate and not be able to recognize their children. If any of your loved ones have been diagnosed with Alzheimer’s, our hearts go out to you.