Bus drivers run on tight deadlines, so they don’t often stop for anything when they’re en route. 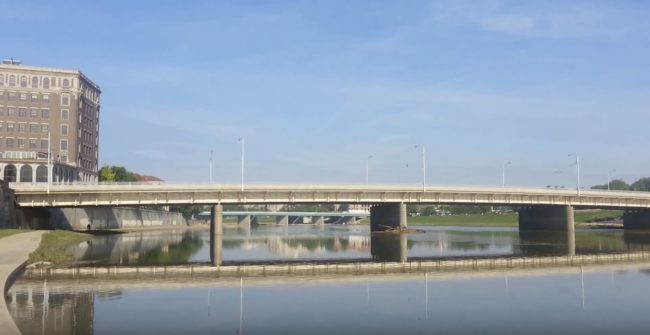 But while this driver was out on his route crossing the Main Street Bridge in Dayton, Ohio, Damone Hudson saw something that he knew was worth losing a few minutes over between point A and point B.

Surveillance footage shows Hudson stopping his bus along the side of the bridge when he noticed a woman standing over the railing. After failing to coax her from the railing from inside the bus, Hudson decided to walk up to her in hopes of turning this awful situation around.

As he awaited for police to arrive on the scene, Hudson could be heard saying, “Ma’am, you look like you’re having a bad day, you know? Can I give you a hug?”

Once cops arrived, the womanfinally stepped back over the railing to safety. Knowing that she was in good hands, Hudson was able to return to his route and continue about his busy day.

Read More: Mom Speaks Out About Bullying And Gang Rape That Led To Her Daughter’s Suicide

Hudson is being hailed a hero for his kind words and the incredible support he showed to a woman on the brink of tragedy.

If you or someone you know is having suicidal thoughts or urges, you can call the National Suicide Prevention Lifeline at 1-800-273-8255 or learn more about suicide prevention here.